Thanks to Sheila for this. I’m having a bear of a time getting online from home the past few days and am only on today because I’m dialing in–so I apologize for the lack of updates recently

I’m a full-time writer who has written for several book series,
including STAR TREK, X-MEN, IRON MAN, and now ROSWELL. I also
work as a Consulting Editor for Tor Books in New York.

Looking back, I was always making up stories about my favorite tv
and comic book characters, but I didn’t start trying to make a
living at it until after I graduated from college and began
meeting local writers at science fiction conventions. It helped
a lot to know that other people, just like me, were actually
selling their books and stories. If they could do it, maybe I
could, too.

Later, I took some writing courses and eventually moved to New
York city, where I started working as an editor for various
publishers and met several other writers and editors, which
eventually led to my first few book deals.

Q3: What made you decide to write the new “Roswell” book series?

My STAR TREK editor knew I was a fan of the ROSWELL tv series, so
he recommended me for the job. (Both the ROSWELL and STAR TREK
books are published by Simon & Schuster.) Since I really liked
the show, I was excited by the prospect of writing a book about
Liz, Max, Michael, Maria, and the rest.

Q4: What can readers look forward in the new book series?

At present, I’m only contracted to write the first book in the
series, which should be published in June. I don’t want to give
away the whole story, but basically my book, tentatively titled
LOOSE ENDS, answers the burning questions: whatever happened to
the guy who shot Liz in the first episode, and how do Liz and
Max react when they run into him again?

Q5: In the new book series will there still be any romance between the
characters?

I still haven’t heard back ! from the tv people, who are reading
the manuscript now, so nothing is definite yet, but I kept
everybody more or less paired off: Max and Liz, Michael and
Maria, and Alex and Isabel. (I kept Kyle and Tess out of the
book, just to keep things simple.)

Q6: Have you read the “Roswell High” series by fellow writer Melinda
Metz?

I read a couple of the “Roswell High” books, just to get a sense
of what they were like. I enjoyed the books, but my novel is
based on the tv show, not the books. (As you probably know,
there are plenty of differences between the show and the original
books.)

Q7: Have you seen the WB’s Roswell? if yes what to you think of the
characters?

Oh, I’ve definitely seen the tv show. Every episode. That’s the
main reason I got the job. My editor also buried me in scripts
and videotapes, just so I could get all the details right.

Of the characters, I have to admit that Maria is the most fun to
write. She gets all the good lines!

Q8: Besides “Roswell”, what other scifi have you written?

To date, I’ve written (yikes!) seven STAR TREK novels, and am
working on two more. I’ve also written five books based on
various Marvel Comics characters, like the X-Men and Iron Man,
plus a non-fiction book on the XENA tv series. Along the way,
I’ve also co-edited a couple of collections of vampire and
werewolf stories.

Q9: If you could write a book about anything. What would it be and why?

One of these days, I really want to squeeze a BUFFY novel into
my schedule. Several of my friends have written BUFFY books and
I’m very jealous! (Someday I ought to write something that
isn’t based on a tv show or comic book, but I’m not sure when
I’ll find the time.)

Q10: Where do see yourself in the! next few months?

I still owe Simon & Schuster two more STAR TREK novels, so that’s
my next big project. They’re big books–about 500 pages each–so
I’ve got quite a ways to go. In addition, I’m also editing a line
of FARSCAPE novels (based on the Jim Henson tv series) for Tor.
The first of those is coming out in May.

Q11: To close – What would you like to say to the readers?

That, hopefully, fans of tv show will like my own take on Liz
and the gang. I had a lot of fun writing the book, and am
anxious to hear what the fans think of it. Certainly, I really
tried to capture the feel of the tv show.

ROSWELL: LOOSE ENDS by Greg Cox is currently scheduled to see
print in June. They’re still working on the cover art, but I’ve
seen some early versions, which look cool. Maybe I can figure
out how to post the final version later. (I’m not very computer-
savvy.)

Thanks again for your interest and enthusiasm.

Note: To all readers, this Q&A was made possible by the help of Erin aka Angel in the Dark. 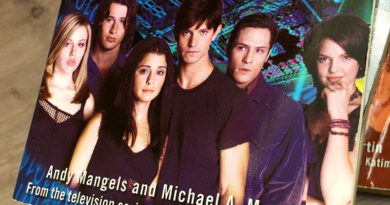