Thanks to DocPaul for this.

There is a small write up about Adam Rodriguez in the current (Sept 21-27th) TV page 12 under Grapevine.

Adam Rodriguez is the only actor ont he new fall schedule who needs alligator insurance. As Eric Delko, the underwater recovery expert on CBS’s CSI: Miami, Rodriguez has to dive the Everglades for bodies (fake) while keeping an eye out for gators (real). “All you see are their little eyes and the tip of their noses sticking out of the water,” he says. The most dangerous thing may be the bacteria-infested water. “It’s beautiful to look at, but it’s not the kind of water you want to take a dip in. You have to clean your ears out with alcohol.”

Also there is a nice write up in Variety about CSI: Miami, Adam’s new show.

The Eye net, which also scored big with two episodes of “Everybody Loves Raymond,” dominated in most key measures, sweeping Monday’s half-hours in both adults 25-54 and total viewers and winning five of six in adults 18-49, according to Nielsen.

While trying to strike a cautious note, it was hard for CBS topper Leslie Moonves to contain his excitement over the Monday numbers.

“Anyone who declares victory after one week is foolish,” he told Daily Variety. “But across the board, we couldn’t be happier. Every half-hour worked. It’s a great opening to the week.”

Moonves said the topic of more “CSI” spinoffs has already come up, albeit in jest.
“When I called the producers this morning, I said to them, ‘CSI: New Orleans?’,” the Eye exec quipped.

Moonves also praised the performance of the rest of the net’s Monday lineup, singling out 8:30 p.m. laffer “Yes, Dear,” from 20th Century Fox TV, as the “unsung hero” of the night.

“We’re very happy here,” he said. “We exceeded our expectations … against the juggernaut.”

One NBC exec admitted the net had been nervous about how “Jordan” would perform opposite “CSI.”

“But if we’re anywhere near this number (in the weeks ahead), we’re not moving ‘Crossing Jordan,’ ” the insider said.

As expected, CBS’ stronger performance in the 10 p.m. hour translated to tasty ratings for its late local newscasts. Net’s affiliates averaged a 9.5/17 across the 53 metered markets, up 30% in rating from the comparable night last year (7.3/13).
Eye is also hoping that the muscular showing at 10 can boost its “Late Show With David Letterman.” On Monday, though, “Late Show’s” 4.1/10 in metered-market overnights still lagged behind NBC’s “Tonight Show with Jay Leno” (5.1/14) — a similar deficit it opened with last season.

Year-to-year comparisons are tough to make based on one night. Letterman’s show, for example, delivered stronger-than-usual ratings on opening night last season with an interview with New York mayor Rudy Guiliani.

Kudos to Adam for his new show on a major network. 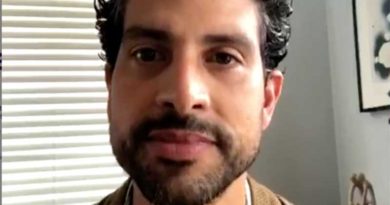