Tom Hanks and his wife Rita Wilson announced on March 11, 2020 that they both tested positive for Coronavirus. The actor, who had been in Australia for his upcoming project about Elvis Presley, turned to Instagram to share the news. He wrote: 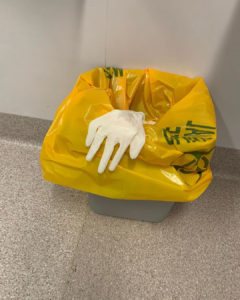 Hello, folks. @ritawilson and I are down here in Australia. We felt a bit tired, like we had colds, and some body aches. Rita had some chills that came and went. Slight fevers too. To play things right, as is needed in the world right now, we were tested for the Coronavirus, and were found to be positive.

Well, now. What to do next? The Medical Officials have protocols that must be followed. We Hanks’ will be tested, observed, and isolated for as long as public health and safety requires. Not much more to it than a one-day-at-a-time approach, no?

Take care of yourselves!
Hanx!

Colin released a message to Instagram in which he tells how much they appreciate the support they got: 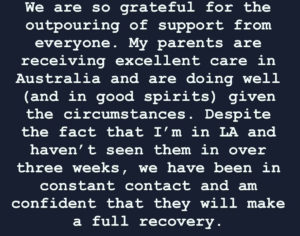 “We are grateful for the outpouring of support from everyone. My parents are receiving excellent care in Australia and are doing well (and in good spirits) given the circumstances. Despite the fact that I’m in LA and haven’t seen them in over three weeks, we have been in constant contact and am confident that they will make a full recovery.”

Many fans, colleagues, former co-stars and friends reacted to the update on Colin’s father and stepmom. Former “Roswell” co-star Shiri Appleby, who starred on Tom’s movie “Charlie Wilson’s War” as well, commented on his post writing: “We love you Colin and are sending so much love to you and your folks 💕”. Schuyler Fisk and Colin both starred on the movie “Orange County” and she send “love to you all.” Kevin Weisman added a reply saying: “crazy times. Sending love, brother.”

Tom Hanks posted an update on their corona diagnosis on March 12: 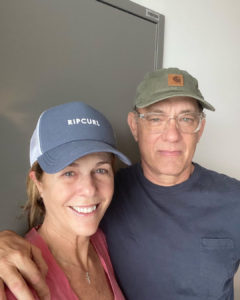 Hello folks. @ritawilson and I want to thank everyone here Down Under who are taking such good care of us. We have Covid-19 and are in isolation so we do not spread it to anyone else. There are those for whom it could lead to a very serious illness. We are taking it one-day-at-a-time. There are things we can all do to get through this by following the advice of experts and taking care of ourselves and each other, no? Remember, despite all the current events, there is no crying in baseball. Hanx 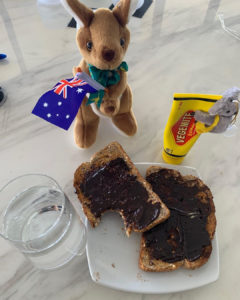 Two days later, Tom Hanks thanked the helpers. He added a photo to his Instagram of a toast with Vegemite on it. A stuffed koala bear is latched on the packaging and a little kangaroo is waving the Australian flag.

Thanks to the Helpers. Let’s take care of ourselves and each other. Hanx

In a new message Colin’s dad said he feels the “blahs” but has no fever and the symptoms are much the same. The photo he shared shows an old fashioned typewriter ‘Corona’ that he travelled with and “that I used to love”.

Hey folks. Good News: One week after testing Positive, in self-isolation, the symptoms are much the same. No fever but the blahs. Folding the laundry and doing the dishes leads to a nap on the couch. Bad news: My wife @ritawilson has won 6 straight hands of Gin Rummy and leads by 201 points. But I have learned not to spread my Vegemite so thick. I travelled here with a typewriter, one I used to love. We are all in this together. Flatten the curve. Hanx 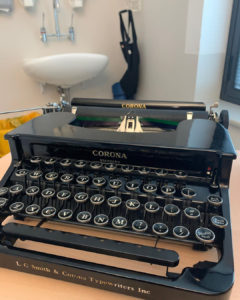 Tom turned to Twitter for his next update. He wrote:

Hey, folks. Two weeks after our first symptoms and we fell better. Sheltering in place works like this: You don’t five it to anyone – You don’t get it from anyone. Common sense, no? Going to take awhile, but if we take care of each other, help where we can, and give up some comforts…this, too, shall pass.
We can figure this out. Hanx

Colin’s parents are now back home. Tom Hanks shared another update 14 hours ago, writing that they are home now:

Hey, Folks… We’re home now and, like the rest of America, we carry on with sheltering in place and social distancing. Many, many thanks to everyone in Australia who looked after us. Their care and guidance made possible our return to the USA. And many thanks to all of you who reached out with well wishes. Rita and I so appreciate it. Hanx