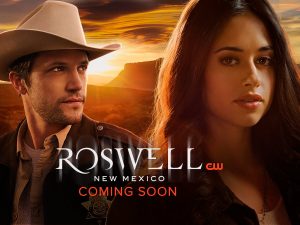 “Roswell, New Mexico” is a re-imagining based on the “Roswell High” books by Melinda Metz and Laura J. Burns. Writer and executive producer Carina Adly MacKenzie developed the show and had co-showrun with Christopher Hollier during the sci-fi show’s first and second season, which debuted on the network during the 2018-2019 mid-season. The series premiered on Tuesday, January 15th behind “The Flash”.

“Roswell, NM” is not a reboot of the TV series by Jason Katims. It’s a completely different show and not a reboot.

While a “revival” or “reboot” can be a straight up continuation with some familiar faces on screen yet done in a way to appeal new people or even a prequel, this particular project is a re-imagining with a different storyboard picking up on ‘Roswell High’‘s source material.

The original actors are not involved in this project. Characters that were introduced in the Katims show don’t appear in The CW show.

Shiri Appleby sat in the director’s chair for two episodes and she even directed an episode with her former “Roswell” co-star Jason Behr. He joined The CW show for an arc in season two.

Apart from producer Kevin Kelly Brown, who was on board of the original show, new people are working on “Roswell, NM” – behind and in front of the camera.

Carina Adly MacKenzie departed “Roswell, New Mexico” as executive producer/co-showrunner of Roswell, New Mexico in July 2020. The third season of the series will return to The CW as part of the network’s 2021 midseason lineup with Christopher Hollier as showrunner.