Alien visitors don’t have to always be evil. That was the message from Steven Spielberg when he made the hugely successful “Close Encounters of the Third Kind” and “ET: The Extra-Terrestrial”. As we enter the year 2000, after a decade of series based around paranoia and alien conspiracies, that theme has re-emerged in “Roswell”, a stunning new drama set in the infamous New Mexico town.

The mystery of Roswell has baffled UFO experts for years. It is said that in 1947 a flying saucer crashed in the area and locals found debris that seemed indestructible. Some claimed to have seen alien bodies near the site, insisting that all evidence was confiscated by the government, but the official word is that the phenomenon was simply a downed weather balloon.

The WB’s new series presents an interesting spin on the idea. Based on Melinda Metz’s popular book Roswell High, the show assumes that the crash did actually happen and that there were survivors.

That fact is revealed in the pilot episode�s opening scenes, in a smalltown diner. After a skirmish between two heavies, a gunshot rips through waitress Liz (Shiri Appleby). She should have died. A tragedy is prevented by Max (Jason Behr), one of three aliens living in Roswell in the guise of normal humans. Like his sister Isabel (Katherine Heigl) and friend Michael (Brendan Fehr),Max looks like us and sounds like us. Yet he has some incredible powers, and chooses to use these to save Liz’s life � running the risk of exposing himself and his friends to the authorities.

As the wound in her stomach closes up, and Max pours tomato ketchup on her belly to give the appearance of a freak accident, the still-groggy Liz must come to terms with what she has just seen. She must also hide the strange, silver handprint embossed on her stomach-and deal with her growing romantic feelings for the dark, enigmatic alien…

“Liz is a 16-year-old student,” says Appleby, when asked to describe her character. “She’s very interested in science and geometry and biology; very interested in learning. She is very innocent, somewhat naive, but with the ability to read what is right or wrong. She’s somewhat of a romantic and has a big crush on this guy but she knows they can’t be together because of the circumstances, but she still hopes. She’s experiencing a whole lot of new things in her life, so it’s exciting to see how she deals with that.”

For his part, Behr describes Max as, “kind of a outsider in the city of Roswell. He’s the quiet type, he tries to be as honest as possible. He is one of the good guys, but he lives in a very contained world. Just the very fact of his existence limits his personal relationship with just about anybody. He has a very big secret.

That secret is that he is an alien and he is quietly searching for the truth of the Roswell crash in 1947. He believes that there is a connection (to him), he doesn’t know what the connection is. He doesn’t know if it’s a parent, a relative, if it has nothing to do with him but is still tangible evidence of others out there. He’s just looking for some sort of absolute truth. Looking for his origin.”

All that Max does know is that after the crash, he and his fellow visitors were locked in suspended animation. They emerged as six-year-old children in 1989, when they were found and adopted by local families. Now, however, the aliens want to know more about themselves and their race. They know that they have special powers, but has no idea where they are from…

“He can manipulate molecular structure,” Behr explains. “(When Max saved Liz’s life) he kind of regenerated the cells and formed the tissue around the bullet. There are an infinite amount of possiblities of what he can do with that power. He can also connect with people in a very cerebral way, emotionally, and see into someone else’s thoughts. They are giving us bits of information as they go along. I think like any any teenagers we are discovering our potential as the days go by.”

Unable to keep the secret to herself, Liz shares the news with her best friend Maria (Majandra Delfino). The pair commit to helping Max keep the secret-even if it involves some trickery on their part. The town’s sheriff, Jim Valenti (William Sadler), has spent years trying to solve the mystery of the Roswell crash and the incident at the diner has piqued his interest in young Max…

“The story begins with two different groups of friends in Roswell who are brought together by an unexpected turn of events,” defines Behr. “This accident forces them to deconstruct their own lives and re-evaluate their own situations and relationships. It’s the beginning of a new life for Max and the opportunity for branching out into relationships with other people, letting them know who he is. You will see a story where two people from different worlds come together accidently and how they and their own small group of friends deal with that.”

Appleby knew that the series had immense potential after reading the script of the pilot episode, which was written by executive producer Jason Katims (My So-Called Life)

“He did an amazing job,” she enthuses. “He really is capable of expressing how teenagers feel in writing in a way that is very realistic and is easy to understand. That’s probably the biggest thing that attracted me to the show. I also really admire David Nutter, who directed the pilot. He has such a way of pulling things out of you by the end of the day. It’s a really wonderful atmosphere to go to work with every day.

As an actor you just want to do things that are well-written and that you are passionate about. Things that can motivate you to dig in there and discover things, and that definitely happened for me with this show. I’ve worked in television a lot, I’ve been very fortunate, and I really enjoy it. I like the pace of it and I like the fact that you are working every single day with a group of people. But it wasn’t necessarily that I wanted to do film or television. I just wanted to do something that I was proud of.”

To Be Continued In Part 2

When Do We Eat? – News & Screenings 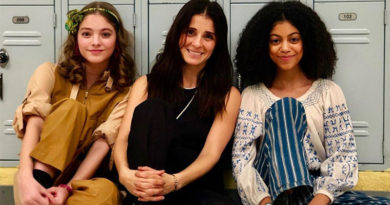