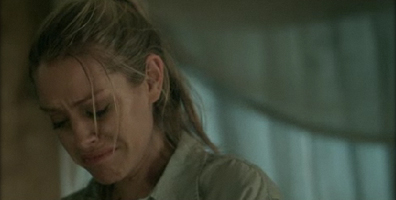 Sara Downing played Julia the girlfriend of Johnny (Ernie Reyes Jr.) and mother of his child in the fighting film “Red Canvas”.

There is no US release date given, but martial arts movie fans from Germany can already pre-order the film on Amazon.de.

The film aired at different film festivals and received numerous nominations. The action movie owned five awards at the Action Film Festival in 2008.

The official website is located here: www.redcanvasthemovie.com. There you can watch the trailer, view some still photographs and download the press kit.

Plot summary written by Kenneth Chamitoff:
Respect is earned by those who are willing to die for a worthy cause. While all men crave respect, few ever find their battlefield. For Johnny Sanchez, war happens in the ring, on the RED CANVAS. What are you willing to die for?