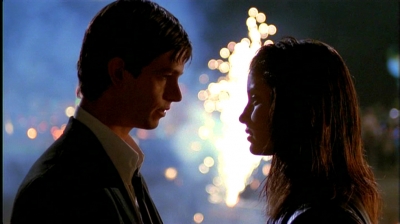 “Open your heart and “Roswell” will put a spell on you, too.” says Mike Duff in the article “WB’s ‘Roswell’ is a Fine Romance”.

The article was published on October 6, 1999 and he wrote that it would be a mistake to hide from “Roswell”.

[…] On the surface, there’s no denying that “Roswell” might seem absolutely ludicrous.

Get this: Besides the standard-issue WB cast of ultra-attractive young people with perfect teeth and dreamy complexions, the whole crazy story revolves around a trio of teenage space aliens.

And not just any galaxy-hopping adolescents either.

These teens are descendants of the beings who were on board the crash of an alien spacecraft that, according to tabloid legend, crashed in the New Mexico desert near the town of Roswell in 1947.

Done snickering yet? Now get ready for a smart interstellar twist on Romeo and Juliet.

“Roswell” is the captivating handiwork of executive producers Jason Katims (”Relativity,” “My So-Called Life”) and David Nutter (”The X-Files”). With wit and intelligence, they transform what might have been little more than high concept hokum into a clever, evocative mix of sci-fi, suspense and raging teenybopera hormones.

A cosmic bond is quickly forged when Max Evans (Jason Behr, “Dawson’s Creek”) uses his otherworldly powers to save the life of Liz Parker (Shiri Appleby) after she’s accidentally shot in the terrific opening scenes.

So begins a star-crossed odyssey between our sensitive Romeo from another planet and his Earthling Juliet.

Read the full article in our archive: WB’s ‘Roswell’ is a Fine Romance 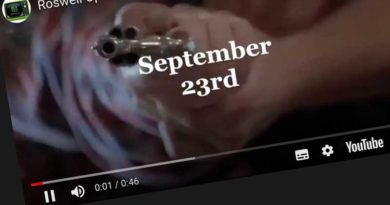 One thought on “Open your heart and “Roswell” will put a spell on you, too.”