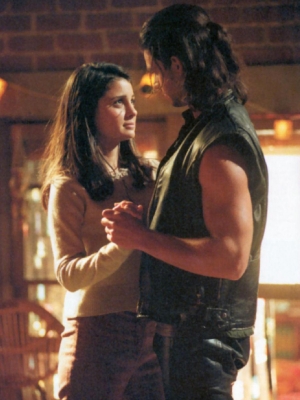 The latest EW “Roswell” blog entry centers on the season two episode “The End of the Word”.

Please make sure to share your thoughts in the comments on community.ew.com.

‘Roswell’ recap: I shall believe

Season 2 of Roswell is such a mixed bag of emotions. It has some of the absolute most memorable episodes, as well as some of the most ludicrous sci-fi storylines. Aliens who shed their skin (aka the Skins) and doppelgängers (or “dupes”) of the Royal Four aliens take up much of the middle of this season.

It picks up at the end of the summer after Liz had walked away from Max, which only made him yearn for her even more. One of the best friendships formed this season has to be Max and Maria. In the premiere, we get the hint that he’s been bugging her all summer to get any updates he can on Liz, since she hasn’t been talking to him.

You’ll recall how Max, Michael, Isabel and Tess learned of their true identities as royalty from their home planet, and their destiny is to defend against their enemies and return home to save their families. Everyone is assuming the roles they lived in their past lives, as much as they hate it. On the other hand, they’re all rejecting their destiny in terms of romantic relationships.

That’s where this episode, “The End of the World,” comes in. Opening with a flash-forward to 2014, we see Future Max and Liz frantic about something in the Granolith (another sci-fi element introduced this season) just before Max travels back in time to the “present” (the year 2000). Check out those wigs!