The pilot of “Roswell, New Mexico” premiered on The CW on January 15th. Thanks to iTunes, the show is now available in Germany, as well. Just a few days after the premiere, fans can watch the pilot as well as a one minute behind-the-scenes look and with Carina Adly MacKenzie, Julie Plec and Kevin Kelly Brown talking about the show. The trailer and this exclusive video are available with a season-pass only.

The episodes can be purchased for 2,99 € HD (SD 2,49 €) each via the iTunes store Germany. In addition, a season pass (Season 1, 13 episodes) for EUR 34,99 € HD (SD 29,99 €) is available. If you buy a season pass, iTunes will automatically download the latest episode, a day after it originally aired. The episodes have English subtitles. A dubbed version is not available, yet. 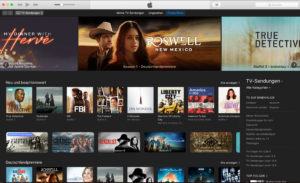 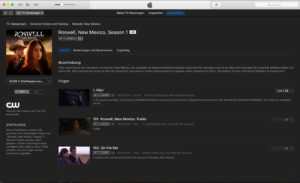 In the U.S., “Roswell, NM” airs Tuesdays at 9/8c on The CW, and new episodes are available the next day free only on The CW App. In addition, the show has been added to Hulu. Fans can buy the episodes in the iTunes store, too.

Please check the iTunes store for your country and send us a screenshot and a link, if the show has been added, too.