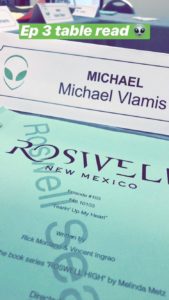 The third episode of The CW’s “Roswell, New Mexico” is entitled “Tearin’ Up My Heart”. Rick Montano and Vincent Ingrao wrote this episode, which could be named after *NSYNC’s second single from their debut album. The single was released on February 10th in 1997 and we can assume that there is going to be a reference to the band, lyric or the song even plays in the Crashdown’s jukebox.

Watch the music video of this 90s boy band on YouTube: *NSYNC – Tearin’ Up My Heart (Video)

The table read for episode three took place yesterday (August 22, 2018). The director hasn’t been revealed, yet.