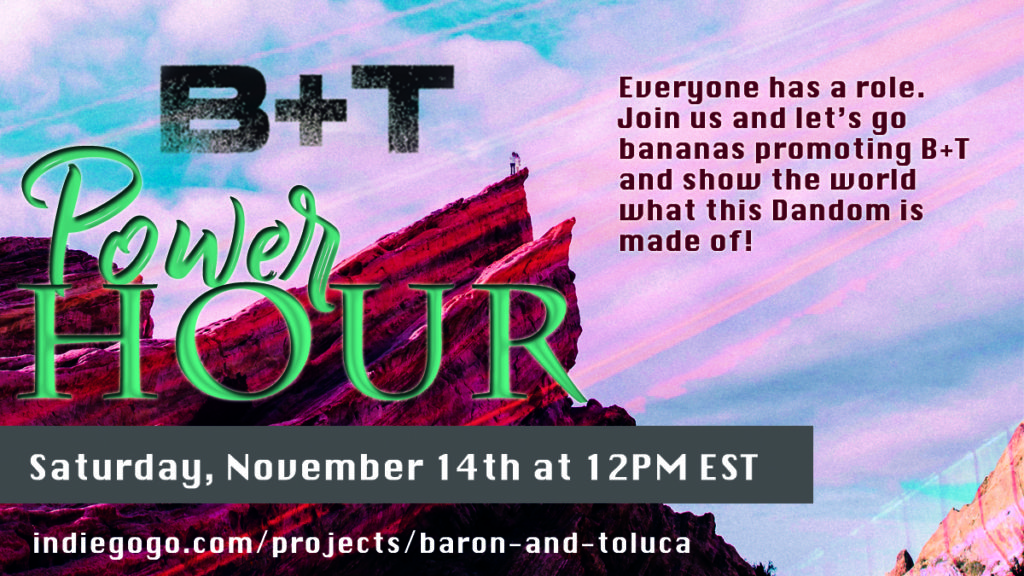 This past month has been nothing short of phenomenal for the Baron and Toluca fandom! Reaching its goal of $100,000 within mere weeks of its onset and with well over a month to its deadline, the B+T crowdfunding Indiegogo campaign burst onto the scene with all the force of an asteroid’s collision!

With the final 12 days of the Indiegogo crowdfunding campaign upon them, Dans have a single-minded goal in sight: reach the extended goal of $150K which would unlock the Mystery Perks and the most highly coveted of all perks: B+T on DVD!

‘Baron and Toluca’ leads Brendan Fehr and Majandra Delfino have promised the very best for their loyal fans and the Dandom: the best crew, resources, cast, and effects that money can buy! Since Indiegogo does keep a percentage of the money raised by the eager fans and curious sci-fi fanatics, we’re left asking ourselves one question:

We are asking all dans, fans, lovers of sci-fi and paranormal mystery to #BandTogether yet again for a Power Hour on Twitter, Saturday November 14th at 12PM EST. This may bring a lot of you dans some nostalgic feels circa 2016 when we did this every Saturday. It’s time to remind the world how fierce our fanbase is and this time spread the word for more to contribute to the B+T Indiegogo campaign!

“Our worldwide power hour will be from 12pm to 1pm in the Eastern Standard Time zone. To convert that time to your zone, please go here:

Here are some suggested tweets:

Let’s reach other sci-fi loving fans and add some fitting hashtags like #scifi #mystery in addition to our steadfast core ones: #EveryoneHasARole and #BandT.

Now here are some tips to add to your tweets, while tweeting within the Power Hour:

– Search for, Like and RT these popular B+T Hashtags: #EveryoneHasARole #BandT #BandTogether #BaronAndToluca
– Call Dust, Netflix, Hulu, and SYFY to attention by tagging them in your tweets. Tweeting with pictures and GIFs is a great way to grab the attention of the Twitterverse. Those tweets get more views, likes, and RTs!
– If you have room, tag as many fandom accounts, your friends and fellow dans as space permits!
– You can tag up to ten people in a tweet with a pic so use some B+T graphics!

Schedule tweets with TweetDeck in order to have time to retweet and reply to tweets or create some in advance if you cannot come live. Every tweet and retweet can make a difference, after all Everyone has a Role. Join us and let’s go bananas promoting a great show that’s not on TV (yet!) but it will be very soon! Let’s show the world what this Dandom is made of!