Thanks to Dymond1207 for sending this in.

Brendan was spotted in the canadian tv guide in the “up close” colum. Thought you might want to know.

TV GUIDE: Roswell fans really helped ensure that your show got renewed for
another season. What was the feeling about that among your castmates?
BRENDAN: We were all very aware of it and certainly appreciative and
flattered. It’s the sci-fi fans. Apparently we don’t have enough fans, but
the ones we ho have, they’re crazy, man. They’re right in there and part of
the show.
TVG: WB shows like Angel, Buffy, and Dawsons Creek lend themselves to pockets
of hardcore fans. Would Roswell work on another network?
BRENDAN: Yes, but there are benefits on both sides. on the WB, we’ve been
grouped with Buffy and Angel and the young stars, so that’s probably been
best for us. But then, if you go to Fox, you’ve got a bigger budget and a
bigger audience.
TVG: Any major changes in store for season 2?
BRENDAN: Well, we found out that our show skews a lot older then we thought;
the average age of our viewer is 27. So late last season, we started to focus
less on relationships stuff and put more emphasis on sci-fi and action plots.
TVG: Have you been to any sci-fi conventions yet?
BRENDAN: No, we haven’t. But I’m a big collector of Spider-Man stuff. I go to
toy stores and comic book shops and they have action figures for Angel and
Buffy and X-Files. I’m waiting for my action figure to come out but I don’t
think Roswell merits action figures.
TVG: Spider-Man, eh? Did you try out for the new live-action movie?
BRENDAN: I went in and read for it but I’m probly not the best choice. Tobey
McGuire [Pleasantville] is an interesting choice, though. I can’t wait. 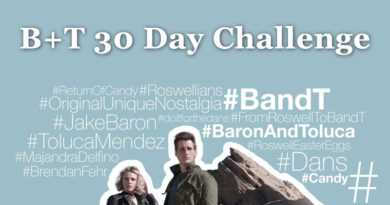 Holiday Movies With The Roswell Cast – 2013