Thanks to Thicket and anyone else who sent this in. Anyone else watch SNL tonight with Gwyneth Paltrow in the Mango skit singing a take-off of “Summer Lovin'” and Matt Damon “Wait a minute, you’re not the one I went out with.”(I’m watching it right now..)

Get Your Roswell Questions in Early by going to this link:
Click here: E! Online – Gossip – Wanda Live – Questions?

Wanda Welcomes the Lovely Ladies of Roswell for a Live, Out-of-This-World Chat!
TV’s hottest stars visit Wanda–and YOU! ASK THE STARS! Beat the rush–get your questions in early for Majandra and Shiri

Break out the breath mints, ’cause it’s about to get spicy in here.

Roswell’s Majandra Delfino and Shiri Appleby will be in the house for Monday’s chat, and as any fan will tell you, there’s a reason those sauce-chugging aliens have such an affection for them: They’re hot with a capital Tabasco.

Of course, our love of Roswell goes beyond these talented lovely ladies (and their steamy counterparts)–it also happens to be one of the best written sci-fi shows on the tube.

If you haven’t been watching this season, trust me, you’re missing out. (That capeless crusader can be taped!). Since Roswell’s move to UPN Tuesdays, the producers are finally in a position to get back to what they do best: high school drama with an otherworldy twist.

“We have more freedom,” says Roswell head honcho Jason Katims. “What [UPN] wants from the show is what I wanted to do with it. We’ve added a little more humor. And we’ve simplified in terms of mythology and sci-fi. I think last season was confusing to people, even if they were watching the show regularly. So, the move has been exciting. It has given us new life.”

That new energy will carry over to the characters in upcoming months. Katims hints that after Isabel’s (Kathryn Heigl) wedding and fiasco honeymoon (Kivar pops in) next week, the producers are planning lighter fare for Izzie.

“We’re doing a whole episode for Katie,” Katims explains. “It’s our ‘Bewitched episode, and we go in between two realities. One is Isabel and Jesse in their marriage, and then we have the ’60s sitcom version of the show. We look at Isabel and Jesse as if they were Samantha and Darren Stevens. It’s going to be fun.”As for Liz and Maria, they also have some Peter Brady-size life changes coming up.

“Maria will be rediscovering music, and she performs again,” Katims dishes. “Her music career on the show will really take off. Maria breaks up with Michael, and, suddenly, they find themselves reevaluating their lives.

“For Liz, we wanted to have sort of a major turning point in her character. It’s coming up in February sweeps, so it’s a little early to talk about. But essentially, Liz finds out that she’s starting to change. She doesn’t know what’s happening to her or why. It causes her to reevaluate her life and reevaluate her relationship with Max.”

Which leads us to the question always at the forefront of any true fan’s mind: What does the future hold for Liz and Max? As it turns out, that’s a tough one, even for the executive producer of the show.

“That’s the constant challenge for their characters,” Katims says. “Liz and Max were basically apart for all of second season, and the fans were really pissed off about it. We decided to bring them back together, but we created other obstacles. Her father forbids them to see each other, and Max’s quest to see his son gets in their way.

“They will persist and be together, but it’s hard to sustain. There is nothing more boring than a happy couple, so we’re talking about doing another twist.”

What exactly is that twist? I’ll tell you more about it during Monday’s chat, which starts at 6 pm ET/3 pm PT.

As you can tell, there’s a lot of dishy ground to cover with Majandra and Shiri in an hour. You can beat the rush by clicking here to submit your Q’s ahead of time.

I’ll also make sure we have a few minutes to ourselves to chat about the other shows you love–like ER, Felicity and Friends.

Get ready for a two hour Georgia-thon this Wednesday 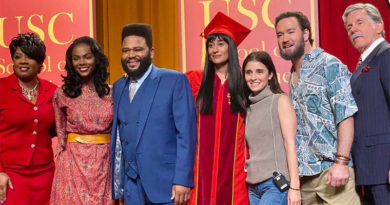