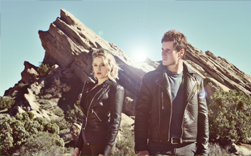 Have you recovered from the big news from last Saturday?

In case you missed it: Majandra Delfino and Brendan Fehr launched the website www.baronandtoluca.com for their new project called B + T The Show on June 25th, 2016. The two former Roswell actors, who played the spicy candy couple Michael Guerin and Maria Deluca, developed a concept for a new show that sounds unearthly mysterious and very exciting!

B+T stands for the character names Baron and Toluca. Can you hear the familiar tone of the names? A well known rhythm? The very short summary definitely has a very candy-ish-tone.

It’s something completely new and the fresh released promotional picture makes us craving for more already… and this is how the fans come in!

THE STORY IS WRITTEN, THE PIECES IN PLACE THE REST IS UP TO YOU…

Crashdown.com and @RoswellBack teamed up again and with the help of all the Roswell Fans, Candy Shippers, Fehrians, Pixie Chicks, Teflon Babes, Lollies, … and new fans through their later projects … we can make it happen!

We need to join forces in order to get the attention of NETFLIX!

Majandra and Brendan added a prefilled Tweet to their website with the challenge “Tell NETFLIX that you want B+T by clicking the Tweet button below. EVERY SATURDAY until your voices are heard.”

The first Twitter Challenge will take place next Saturday on July 2nd, 2016. With our latest #RoswellBack campaigns we had a lot of success tweeting globally at 6 PM EST time slot, which is for example the New York area. 11 PM in London, 5 PM in Chicago etc.

Watch the video by Nomi below for step by step instructions on what to do for this Saturday to not only tweet: “@netflix – the people have spoken! Give us the show B+T!!!! @baronandtoluca www.baronandtoluca.com #NETFLIXforBandT” but to make the hashtag #NETFLIXforBandT go viral!

We can do it if we have your help but we all tweet at the same time globally. Here is a chart below for reference. See you this weekend and let’s make “Baron and Toluca” a reality!

#NETFLIXforBandT Tweet-A-Thon: A New Photo, A Glimpse At A Necklace And More

“Zarra’s Law” – Behind The Scenes Photos