We stumbled upon some hidden clues, new cast members and rumors, which still need to be confirmed … As previously reported, the first table read took place on Friday and the actors shared many photos and fun Instagram Stories. We learned quite by chance that the pilot will be produced under the title “Roswell, NM”, when we saw the name badges of the actors in the short clips. The hashtag #RoswellNM was used by Isobel actress Lily Cowles, when she uploaded a new photo to her Instagram. She captured the picture “Alien: Covenant 👽#roswellnm.”

The posted photo shows a bunch of polaroid photos with the actors and people involved in The CW’s re-imagining of Roswell and they did not forget to take a picture of the dog on set. Maybe they will add Nathan’s dog Charlie as Max’s dog on screen, too?

Nathan Parsons wrote “Peer pressure”, when he added the same photo to his brand-new Instagram and he goes with the fun hashtag #UFOMG, which is combining the sci-fi element and the exciting time of this new journey. Michael Trevino, Carina Adly MacKenzie, and crew member Lauren Petzke shared similar photos with some more polaroids in it, too.

Yah, this group is cool 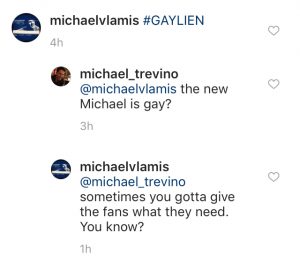 In the comments of Lily’s posting, her co-star Michael Vlamis might possibly revealed that either he’s going to play a “gay” alien or a new cast addition by adding #GAYLIEN* to the comments. Last year, Carina Adly MacKenzie revealed to Pure Fandom that “There will be LGBT characters prominently featured” on the re-imagining of Roswell. She continued “I basically took the defining characteristics of the characters, the things I truly loved about them, and thought, “what if these people were 10 years older, and the 10 years between high school and now didn’t go awesomely for everybody?“ Alex and Michael a possible couple? That prominently featured relationship would be very different!**

Please read the full interview on Pure Fandom and don’t forget to check out our early listing of facts we collected about the new take on the Roswell High books. (What Do We Know About The CW’s New Alien Show? – Part 1 | Part 2)

With all those changes, we’ve got to keep in mind that this version has nothing to do with The WB/UPN show we know. “It’s a really, really loose interpretation [of the Roswell High books], but hopefully a respectful and even reverent one.” said the writer Carina Adly MacKenzie in the interview, too. On Twitter she clarified recently, “There will be no Tess.” In addition the characters that were added in the Jason Katims show as well as plots and everything that was on the original “Roswell”, won’t make it into the re-imagining. “Anything that was made up specifically for the 1999 TV show, I don’t have the rights to.“

Actress Amber Midthunder is also shown and tagged in one of the polaroid photos. She’s known for playing Kerry Loudermilk in the FX series Legion and her television credits include roles in shows such as Banshee, Longmire, and Hell Or High Water. She was a guest in The CW’s “The Originals”, playing Kayla in the season 3 episode Alone with Everybody. It hasn’t been announced that she joined the cast, yet.

Luce Rains has been added to the IMDb cast list of the project, as well. He’s going to play a Rancher – in a guest role presumably. Writer Eva McKenna, who wrote for Julie Plec’s “The Vampire Diaries” and for its spin-off ”The Originals” seems to be on board, as well.

Let us know in the comments below, if you think we missed something. 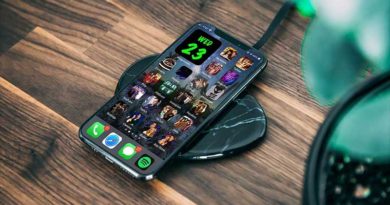 Gone Too Soon: Best Canceled TV Shows of the Decade 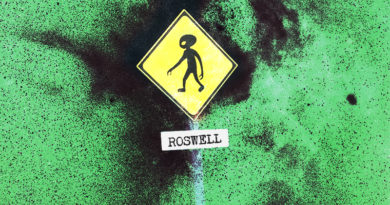