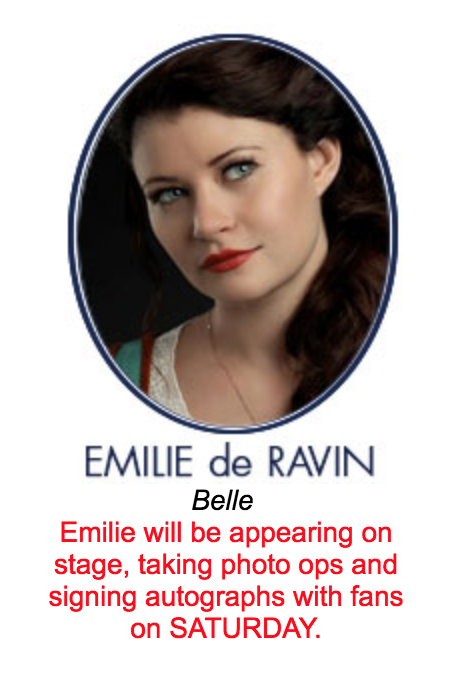 “Emilie de Ravin will be joining us on Saturday”, announced Creation Entertainment on their website. The official “Once Upon a Time” convention will be in Chicago April 20th – 22nd with Lana Parilla, Sean Maguire, Rebecca Mader, Jared Gilmore, Andrew West and more stars from the show.

Emilie will be appearing on stage, taking photo ops and signing autographs with fans on SATURDAY.

Creation Entertainment’s
ONCE UPON A TIME
Official Convention

They say that all good things must come to an end, and it is with sadness that today, February 6, 2018, we learned that ONCE UPON A TIME, the wonderful show we love, is wrapping up its seven year run with the current season. Therefore we have made our 2018 ONCE UPON A TIME Conventions a FAREWELL TOUR honoring all the great years of entertainment. Join us as we too wrap up our OUAT Official CONVENTION Tours with these gatherings. And a hearty thank you to all our great fellow fans and the stars that made this series and our past conventions times we’ll always remember!

16 ‘Lost’ Celebs picnic in the park

Emilie Stars In ‘Carrie’ On NBC In November