The writers of The CW’s “Roswell, NM” announced an exclusive fan event. ”We’re invading Comic-Con! Win tickets to a private event with Aisha Tyler in conversation with show runner Carina Adly MacKenzie + stars Jeanine Mason & Nathan Dean Parsons! Check the image for details. 21+ only because aliens like beer too.”

The exclusive private event takes place on Saturday, July 21st at San Diego Comic-Con. The first 75 people who send an e-mail to roswellinsandiego@gmail.com at 9 PM PST on July 2nd can win tickets for themselves and a guest. 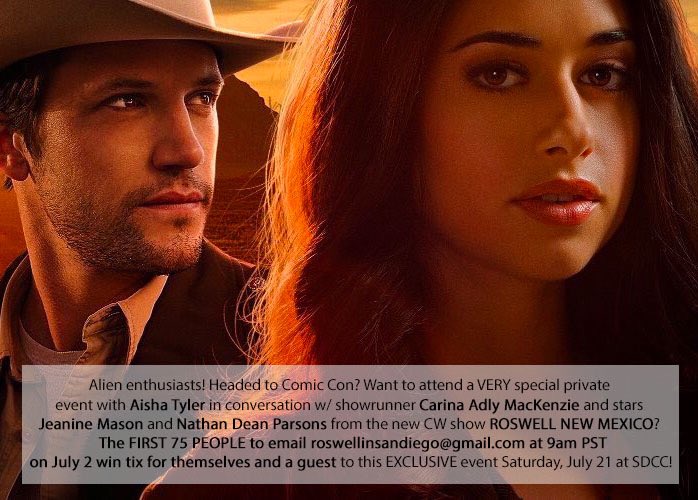 They also noted in a follow-up tweet on the social media platform, that no comic-con badge is required and they jokingly added “Antennae optional.”

The Liz Ortecho actress in The CW’s re-imagining, which is based on the “Roswell High” books, Jeanine Mason shared the event details on her Twitter, as well. She wrote “Yes! 21+ only friends. Aliens also like wine. Particularly red.”

We can only hope that the second Max Evans can handle alcohol a little bit better than our favorite alien from the original show.

We’re invading @Comic_Con! Win tickets to a private event with @aishatyler in conversation with showrunner @cadlymack + stars @itsjeaninemason & Nathan Dean Parsons! Check the image for details. 21+ only because aliens like beer too. pic.twitter.com/lAI7G2ihW5

The FIRST 75 PEOPLE to email roswellinsandiego@gmail.com at 9am PST on July 2 win tix for themselves and a guest to this EXCLUSIVE event Saturday afternoon at #sdcc! This is a one of a kind opportunity. Don’t miss it!

Aliens will be roaming Comic-Con. See you there. 💚👽 #SDCC https://t.co/MdDsxuusHZ