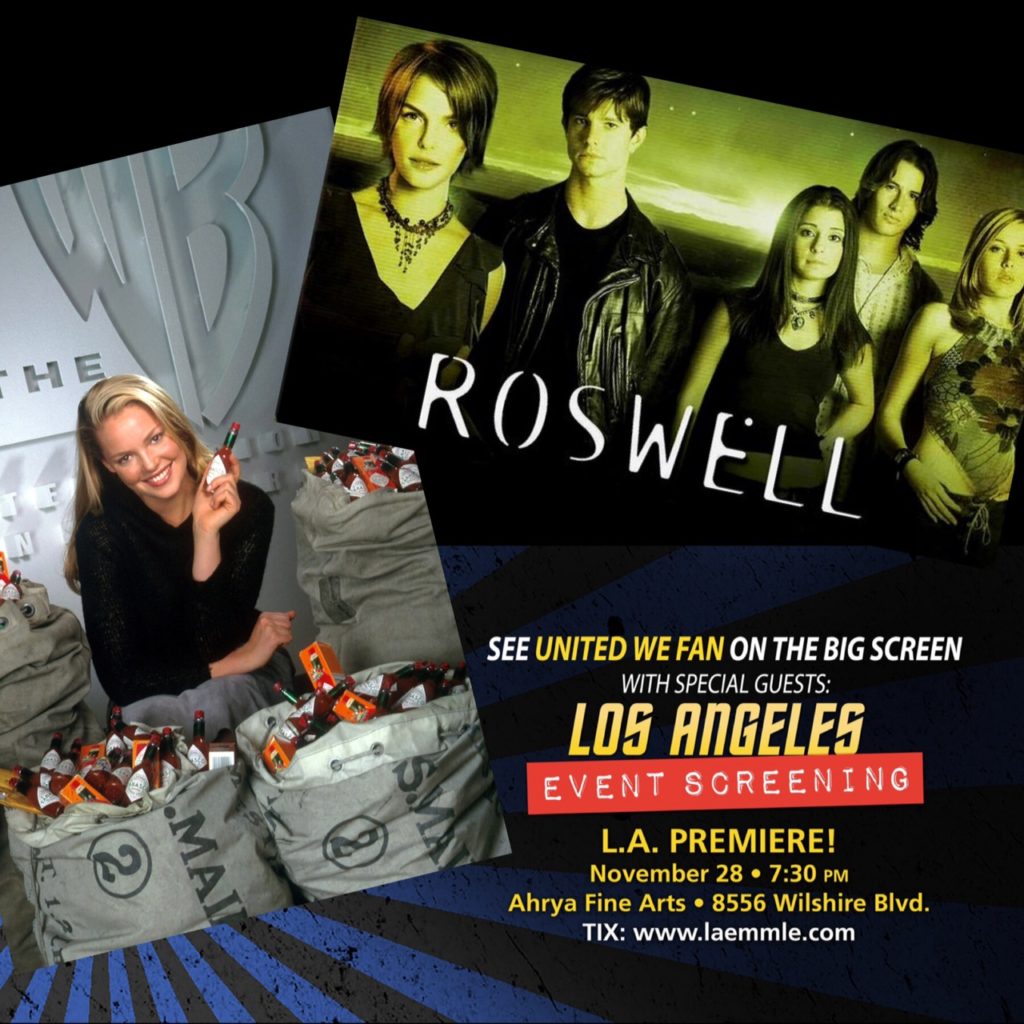 “Ok, so what’s with the Tabasco Sauce? ” – Maria DeLuca

The documentary “United We Fan” brings together fans, stars, and creators to explore TV fan campaigns.

The “Roswell” Tabasco campaign is featured in this film. Thousands of letters and bottles of Tabasco sauce made The WB reconsidering the show’s cancellation.

Fans of Jericho, Chuck, Longmire, Veronica Mars, Arrested Development, Person Of Interest or Cagney and Lacey fought for their show as well.

The documentary is a must-see and Roswellians living in the LA-area please mark your calendars! The “United We Fan” Los Angeles premiere takes place on November 28th, 2018 at 7:30 PM (Ahrya Fine Arts, 8556 Wilshire Blvd.) and you can win tickets for the screening!

We have five (5) pairs of tickets to giveaway to the west coast premiere of the new film “United We Fan” in LA on Nov 28th. Please retweet and follow @UnitedWeFanDoc for your chance to win!

Winners will be announced on Monday!

We’ll randomly choose the 5 winners on Monday and message them via Twitter to let them know.

LA-area #Roswellians! We have 5 pairs of tix to giveaway to the west coast premiere of the new film UNITED WE FAN in LA on Nov 28th. It's about TV fan campaigns and #Roswell is in it! RT+FOLLOW @UnitedWeFanDoc for your chance to #WIN! Winners announced on Mon! #RoswellTVshow pic.twitter.com/67NrFHBKJQ

Don’t miss this chance to see the documentary on the big screen with fellow fans!  It’s a joyful and heartfelt celebration of the fans who fought to save some of television’s most iconic shows.

Please share this with your fellow TV fans! You can buy tickets for the premiere here: https://www.laemmle.com/films/44817

Shiri about “Race for the Cure”, “Life Unexpected” and “Roswell”