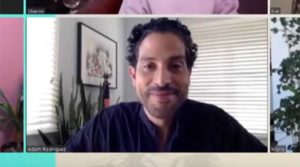 Watch the interview on YouTube: The Talk – Adam Rodriguez Spills on ‘Penny Dreadful: City Of Angels’

“I hate to say this, I think it’s the best thing I’ve ever worked on – production-wise, costumes… the writing, unbelievable,” said Adam about the Penny Dreadful sequel in the interview. He added, “It’s just so meaningful and so well done. Everything that’s being talked about on the show is everything we’re experiencing now, 92 years later and we still haven’t seemed to solve any of these problems. I think people are really going to respond to the material in this show and the time period is just amazing – late 1930s.”

Adam joined the show in a recurring role. Watch “Penny Dreadful: City of Angels ” on Sundays at 10p/9c on Showtime.

Thanks Brendan Fehr Online for the heads up!

Adam Rodriguez appears in Will.I.AM’s “Yes We Can” project