Mark your calendars! The countdown to the final day of the B+T Indiegogo campaign started. Majandra Delfino and Brendan Fehr announced that they are going live on Facebook next Sunday. Be there on November 22nd at 3:30-7:30pm PST. (Click on the date in order to use the time and date converter for your time zone.)

A new perk will be added to the Indiegogo on Tuesday. Follow the official

The campaign is winding down and though we’ve reached our goal, there’s a lot more to do and to get. We’re well within reach of the 145K stretch goal: THE MYSTERY PRIZE! We need that last week push so let’s keep spreading the word and bringing more people to the B+T family.

Speaking of the B+T family, you’re all invited to the 4 hour FaceBook livestream with Brendan and Majandra. We have tons of things planned and don’t want you missing out on any of it. Check out the schedule(s) below and again, be sure to share them!

Looking forward to it all. EVERYONE HAS A ROLE. 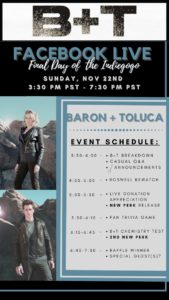 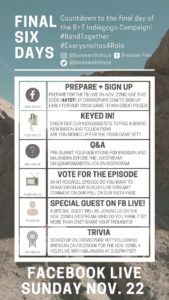