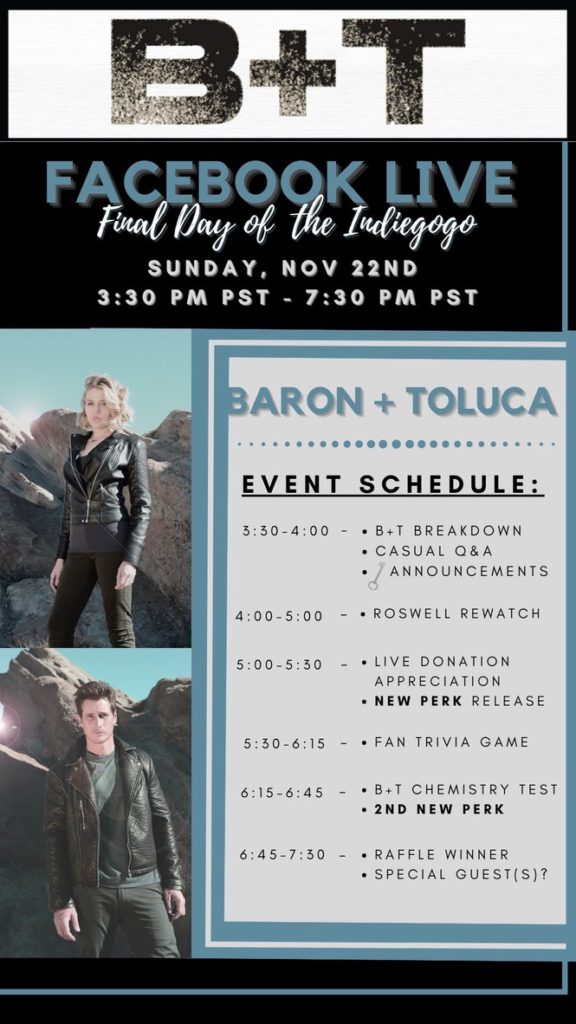 Edits and additions by Tina, Sarah and Nomi

Big things happen when we #BandTogether.

If you have been campaigning and talking about “Baron And Toluca” since the summer of 2016,then this past month went by in a blink of an eye!

45 days of campaigning are coming to an end tomorrow. During that time, Original Dans, Roswellians and new fans showed their enthusiasm and support for B+T on Indiegogo. Perks were bought, (secret) perks sold out in seconds and Majandra and Brendan’s minds were blown away by this Indiegogo campaign kick-off with dan-power par excellence. And the dans continued to show massive support for the campaign.

As we were writing this, the Indiegogo reached 146% of its fixed goal and we are pretty positive that the stretch perk at $150K will be reached, so that the B+T DVD will be unlocked soon.

The icing on the cake, after all this campaigning, is having the pilot episode filmed next year! Any money raised passed the goal will be used for even cooler effects and filming treats.

The big final day is tomorrow! Let’s finish this campaign like it began!

Majandra and Brendan worked on an impressive — and BandTastic — event schedule with four hours filled with fun, surprises and perks. The hometown visit perk (US only) and the spa-day with Majandra will obviously go live during the day and we’re sure that they have some more surprises planned. One or more surprise guests are going to join them, too. So, don’t miss this special and once-in-a-lifetime event!

We hope to see you there! Spread the word, buy a perk (or two) and let’s have a good time!

Here are the essentials:

Info: If you don’t have a Facebook account, Majandra and Brendan have you covered. In the latest B+T newsletter, they wrote that they will be sending out a link also, so that you actually don’t need a FB account. But they also note that you won’t be able to comment and ask them or their special guests questions. Their tip: Stream on a tablet or computer, you’ll need your phone for the trivia game!

Test your knowledge on Roswell, B+T, and Brendan and Majandra to win an awesome prize! The game is scheduled to start at 5:30pm PST on the platform

Code to enter: 4ATDT
Save your seat and login now!

Info: Majandra and Brendan note that you’ll need your phone for the trivia game and they recommend to not streaming the Facebook live on your phone. You’ll want to use a tablet or computer.

Buddha forgive me, but I’m gonna kick your ass!