The plan for computer coverage at the Crashdown Party was to have 2 computers upstairs in the main party area, and London2LA’s lap top down in the VIP area of the Key Club, which was known as the plush room. We had planned to use that laptop to do live updates of what was going on, and it was assumed that if the cast did show up, they probably would only stay for a few minutes in the room, and it would be quiet there.

As we went down to do the first update a little after the party started, the room had already started filling with people from the production staff. Quite a few of the writers, and people from Jason Katim’s office were around. I also noticed Jim Ortlieb, the actor who plays Nasedo standing at the bar. As Goldenboy and I were trying to get a news update on line, he walked over to see what we were doing with the computer. Jim sat down then and began talking about the site, and what a great job we were doing with it. He and his wife then began to ask a lot of questions about how things were done. I asked if he wanted to post on the site, and he was all over it. It turned out that he had already signed up for a user name (Mr.Harding), but hadn’t posted yet. He typed in the post, that is still on the Roswell board, and his wife finished up part of it. 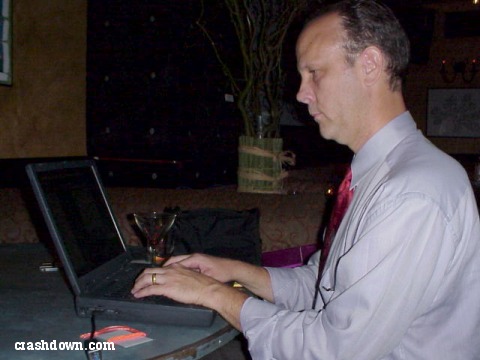 Jim talked about the roll of Nasedo, and said he would be in the show throughout the season. He joked that Nasedo would be a good character to have for guest star of the week roles. He also hinted about some big event that happens with his character at the end of the first episode. I tried to get details from him, but he wouldn’t budge. I then showed him the crashdown spoilers page, and we looked at those together, but he said we don’t have whatever it is that happens yet, but that it will be good. He was a very nice person, and spent a lot of time looking at the site, and talking about how great the fans were.

A little later, when we came back to the room, Bill Sadler was there. He also talked about Crashdown, and let me take his picture with London2LA. 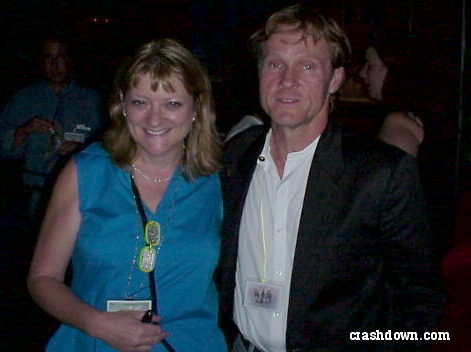 About then Colin Hanks came in and he walked over to the computer to see what Goldenboy was doing. He asked if that was crashdown on there, and wanted to know what we were doing. After we told him we were doing updates, he asked if he could do a post on the boards. We set him up with the user name of Mr. Krinkle, and he was able to get his post through. He spent a lot of time on it, trying to get what he wanted to say down. While he was still at it, and while we were sitting there helping him, Shiri walked up and leaned over to see what was going on. When she saw that Colin was posting, she told him that she had already registered herself, and said she would probably post in a day or so about the party since she already had a login. She talked for a couple of minutes about how no one believed it was her when KillerCat first came to Fan Forum.

Jason, Nick, and Katherine showed up at about the same time, and the computer was kind of a focal point of curiosity. They were all so thankful to crashdown, and all of the people who helped support the show with the various campaigns and so on.

Kevin Brown was upstairs during this, running the RIHHIN auction, and you could hear him over the loud speaker. Everyone was talking about the bidding war over Jason’s scrubs, and how high it was getting. When Kevin finally announced that they were sold for $4000, I was standing next to Jason, and he asked, “Did they just say $4000?”. I told him yes, and that if he were to take off his underwear, and take them up now, they would probably bring in $20,000. He laughed and said, “but I’m particularly fond of these underwear!”.

A little later, I was coming back in the room to see how Colin was doing with his post, and noticed Brendan and Majandra standing in the entrance way. I actually walked past them, and Fehrocious asked if I had met Brendan yet. She introduced us to him and to Majandra, and then we talked with Brendan about his web site, which we recently moved from the backup server where squanto had first started it, to the main Fan Forum page.

Majandra walked over and talked to Colin who was still at the computer while Goldenboy and I talked to Brendan.

This was about the time that Jason and Brendan decided to walk around. Jason walked out the door by himself, and I heard the crowd go wild, and he stepped backwards into the room. I heard somebody say that Brendan and Majandra had decided to go out on their own also, but one of the production people told a security person to get out there and follow them.

Somebody was asking who it was that had bought the scrubs, and they decided to bring her down to meet Jason. I think he may have been the one to suggest it himself, but before long Mad4Max was down there. Jason asked me if I could take a picture for the website, and said that Mad4Max deserved it.

After Colin finished up, Katherine came over to post. The server was extremely slow and we had a hard time getting her registered. This was about the time that Jason and the rest of the cast went up on stage, so Katherine left me there working with her post and went up onstage. That’s my biggest regret, missing the cast on stage. The server was still slow, so we decided to do all the posts for the cast in one, and to post it when things quieted down. Katherine’s mother was with her, and sat talking to us while Katherine posted. She confirmed that she does indeed follow the boards to see what people are saying. She was one of the nicest ladies I’ve ever met, and I think Katherine is a very lucky girl to have such a caring mom.

Nick came to post after that. He wrote his whole post himself, including the parts in brackets. He said it was hard to explain, but that the whole web site thing kind of blew him away. He talked about how strange it was to see himself on the net, and that it didn’t make him a special person or better than everyone else.

About the time Nick finished, it was close to 10 and the room started to fill. The entire cast was asked to take a group picture, and they did that. Then Jason came over to do his post, and he brought Mad4Max to help him through it.

And finally, as we were being ushered out of the room, Emile came to do her post. Liz helped her get it going, and she laughed and asked Liz if she really posted as “Goldenboy”. (The post with all the cast members was done by Goldenboy because of the server problems.)

All in all, I would have to say that everyone associated with the show was extremely nice, and very appreciative of crashdown.com, and all the things we have done together.

You can see the pictures of the cast members posting, and read what they had to say by going to this article.

ETonline: Gina Carano and Brendan Fehr on “Daughter of the Wolf”

Tower Records Documentary will be featured on NBC’s “Rock Center”

Emilie – Not one of “The Four Saints”