Jason Behr (Roswell)
Teenmag.com: Were you cognizant of all the fan sites kids were putting up in an attempt to help “Save Roswell?”
JB: “I’m pretty computer stupid but I’m aware of all the support that has come from the fans and nobody expected that sort of response but everyone on the show is really grateful for it.”

Thanks to anjul for this :)

Spotted: Jason Behr on a commercial for a TV channel in New Zealand,
singing “I’ve Got You Babe” and looking kinda sheepish and cute.

Thanks to *~MajandraSoLucky~* for this :)

Jason Behr appeared in a New Zealand TV commericial for TV2, the
channel where Roswell was aired in New Zealand – 8:30pm, Tuesday
nights from early March to early August.

* Shortland Street is a popular New Zealand made medical drama, and
What Now? is a popular childrens programme, filmed in Avalon Studios
in Wellington (where I live!)

Thanks to Michael for this :)

Thanks to Samantha for this :)

I found the trailer for the upcoming movie “Traffic” (starring Michael Douglas, Catherine Zeta-Jones) , the one where Majandra plays one of the drug addicts.

If you look closely, she can be seen with two other people trying to help a guy from falling to the ground (she’s the one on the right) and then a close-up of her crying out.

Check it out!
Traffic

Thanks to Stephanie for this :)

I found that they have info on what
the movie “Forsaken” is supposed to be about.It’s at the sony
site.Here’s the link: Forsaken

heres some info on Brendan that i never knew before. for example, Brendan’s
full name and what he does when he first wakes up and when he gets to his
trailor. hope this isn’t old news.

Katherine Heigl (Roswell)
Teenmag.com: Do you go online?
KH: “I don’t go on that much but if my mother is around she’ll log on to see what everyone’s saying about the show and call me upstairs to check it out! But I’m bad, I don’t know how to do anything – I’m terrible at it.”

Thanks to JonnysGirl for this :)

Hey I wanted to let you know that Katherine Heigl has a little bio and PIC in
a mag called “diG” (Nov/DEC 2000) with Charisma Carpenter on the cover. I got
the mag when I bought something in a Journeys Shoe store. The Mag is all
about skate/snowboarding, culture…..pot luck basically. They have a
website: http://www.dig4u.com I guess you go there to vote for your favorite
“It” girl, which includes Heigl obviously!

Here is what the mag says about Heigl:

Then it goes on to say:
Katherine is the sexiest alien to ever grace the boob tube. Acting since she
was nine, now the 21 year old is currently acing the role of Isabel Evans on
the WB’s Roswell. Her background in film, however will soon take her back to
the silver screen, shining in the upcoming indie flick, 100 Girls.

it has info on katherine, some things i never knew about her. just wanted to
share with Roswell fans.

Thanks to Oscar for this :)

At the official website of the movie Valentine they
show like a slide show of pics when you get there and
one of them is Katherine Heigl with a knife. Go check
it out at http://valentinemovie.warnerbros.com/

Roswell” is pre-empted this week by a documentary called “Teens Get Real” (WB, 9 p.m.). Host Jessica Simpson chats with teens all over the country about their innermost feelings on a variety of topics, like love, sex, school, parents, siblings, etc. etc.

Oh, almost forgot…I uncovered a very cool “Roswell-related” story this week, that I’m dying to share with you!

It turns out that before Jason Behr landed the role of Max, another hot young future star was being seriously considered for the part…”The Patriot” hottie Heath Ledger!

In fact, as the story goes, Heath actually had the part, until execs freaked at the last minute that he’d starred in a little-known series called “Roar,” which had been cancelled. They decided not to risk their new show on him, and the part went to Jason. It’s interesting to think what the show and the role of Max might have been like with Heath, but it seems like things have worked out well for both actors this way, so let’s just be glad that we’ve had the opportunity to see both of the talented guys in action.

PS – “Roswell” is back in action on Dec. 18, with an episode that finds Max haunted by the ghost of a man he failed to save by using his powers, while Michael is wigging out over a Christmas gift for Maria, since he didn’t buy her one at all last year. Sweet, huh?

Thanks to Erin for this :)

I’m not sure if anyone has sent this in already, but there is at least one
new Roswell poster out. I was at Wal-mart the other day and found a picture
of Jason against a starry background with Brendan, Shiri and Katie’s faces
smaller and off to the side.
It’s to big to scan but it’s really cute!

Thanks to Ashley B for this :)

I bought this mag the other day, its called “Sugar” its an British magazine and it has this whole exlclusive about Roswell and the cast. It also has some great pix of Jason Behr!!!

Thanks to Lee at Blizzard Records for sending this in :)

We at http://www.blizzardrecords.com cordially invite you to visit our site.
Blizzard Records is designed for those individuals who are interested in
purchasing music CDs that are not available in stores. All CDs can be
reviewed for free at anytime you wish.

Just wanted to let you know……I was so excited to find a Roswell 2001
calendar on sale at the barnes and noble site. I hope other fans are as
excited as I am!!!
Thanks!!
Brianne 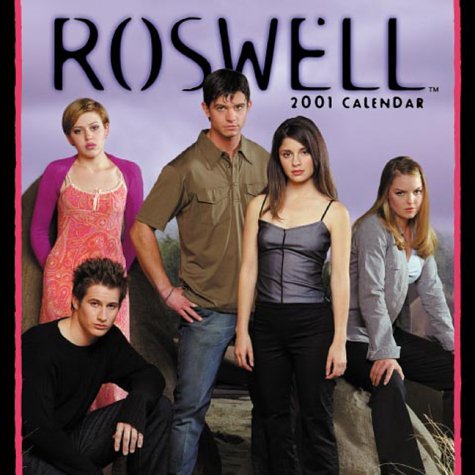