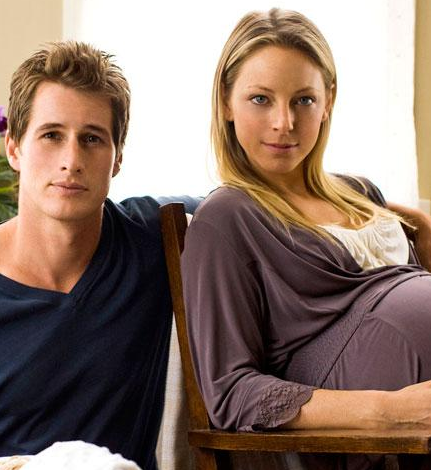 Tune in and watch the LMN original movie “And Baby Will Fall,” starring Anastasia Griffith and Brendan Fehr, tonight.

The chilling thriller follows happily married high school sweethearts, Ivy (Anastasia Griffith) and David Ross (Brendan Fehr), as they prepare for the birth of their long-awaited first child, after years of trying and several miscarriages. Ivy’s almost to term when the couple holds a yard sale to clear out old belongings and an old high school classmate, Melinda White (Clea Duvall), happens upon them … and, coincidentally enough, she is also pregnant. A few days later, Melinda is reported missing, and all the bloody clues point to David. Could Ivy’s faithful, loving husband have been having an affair with Melinda all along? As the story unfolds, dark secrets in Melinda’s past come to light, and Ivy finds herself living in a nightmare. The movie is based on the critically acclaimed novel, “Never Tell A Lie,” by Hallie Ephron.

In September 2010 the actor announced that he and his wife Jennifer are expecting their second child together. The second addition to the Fehr-Clan is due this month. On Wednesday, March 26, 2008 Brendan Fehr became a first time father to daughter James Olivia Fehr.

FanArtFriday – Show Us Your B+T Fanart