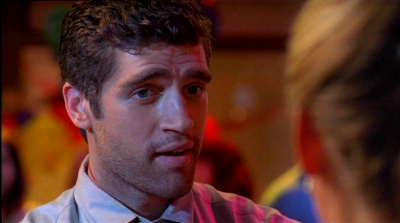 In Roswell’s second season Jeremy Davidson had a recurring role as geologist Grant Sørensen and Isabel’s love interest. Since 2007 the actor plays Chase Moranas a member of the elite Delta Force on the Lifetime series “Army Wives”.

Congratulations to the happy couple!

He told E!Online “My family life at home in Brooklyn is becoming [more involved]—we’re actually pregnant with twins. We are four months along. So balancing career and family is becoming increasingly challenging for me…and in five months we are going to have three kids under the age of two. We are in happy shock about it.”

The couple met in 2004 and married two years later. They are already parents to a 17 month old son.

The official website for “Army Wives” is located here: www.mylifetime.com/shows/army-wives/a>