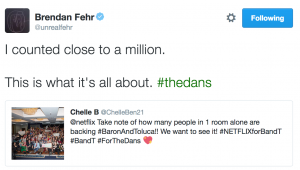 Dedicated Roswellian and Baron And Toluca fan Chelle teased something exciting a few days ago, by telling the B+T family “Oh fellow dans, I have something good. But I can’t show you yet. Soon! 😉 #NETFLIXforBandT #BaronAndToluca #BandT”.

No hint was given, but it was worth the wait. Chelle replied to a curious fan, “Nope. But you guys will be amused. And hopefully @netflix will take note. #NETFLIXforBandT”.

On St Nicholas’ Day she surprised the fanbase with a fun photo, which was taken at a convention in London. A room full of fans holding up signs in order to show their support for Baron And Toluca.

Brendan Fehr was impressed by the fan power. He reacted to the photo on Twitter and tweeted: “I counted close to a million. This is what it’s all about. #thedans”

Please check out the tweets below and to say it in Chelle’s words if you need some #BaronAndToluca flavoured scifi in your life. Something new & fresh!, please tell Netflix that you want B+T with Majandra Delfino and Brendan Fehr.

In case you are wondering, Baron And Toluca is not a spin-off or reboot in which the actors will reprise their Roswell roles, but something completely new. Please read the official and updated description below and make sure to watch the promo on YouTube! Please make sure to give it the thumbs up, comment and share it with your friends.

Exes, Jake Baron and Toluca Mendez, find themselves reunited in a familiar part of New Mexico – much to the delight of one and the horror of the other.

Forced together by unforeseen circumstances, they must remain in New Mexico together, to try and unravel a paranormal mystery threatening to kill them both.

That is if they don’t kill each other first…

Oh fellow dans, I have something good. But I can’t show you yet. Soon! 😉#NETFLIXforBandT #BaronAndToluca #BandT

Photo by the amazing Grant Gowdy ❤

I counted close to a million.

“Spiderman” Painting Is Up For Auction Again