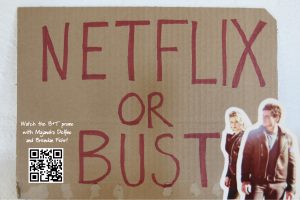 Just the idea of a possible show with the two former Roswell actors Majandra Delfino and Brendan Fehr animiated fans to come to Twitter weekly in order to ask Netflix to pick up B+T. A five minute promotional clip really showed the fans and dans what they can expect of B+T The Show and everyone is beyond excited and agrees on the fact that: This show must be made!

A catchy promo has been released on Halloween last year, and new fans and sci-fi fanatics are discovering the promo daily, wondering when the show will hit the TV screens. Unfortunately, the show has not been picked up yet. If you want Baron And Toluca as much as we do please join us take action now. Continue to show your passion through tweets and post on social media to get more fans on board, but of capital importance is to show Netflix that you want this show to become a reality. Let Netflix hear our voices and help to reach the goal.

Rex posted a picture of his handwritten letter to Netflix’ boss of original content saying “I’m a longtime, dedicated fan of NETFLIX and it’s nostalgic SCI-FI programs such as Roswell, Buffy, and Continuum. I faithfully watch these shows to remind me of what really great programming can and should be I strongly believe B+T will prove to be a worthy spin-off and a big hit, especially among “Roswellians.” We agree that B+T would be perfect to fill that slot.

As a fan of Brendan Fehr his NBC show “The Night Shift” and his earlier work, Maria from @NightShiftDE, highlights the uniqueness of Baron And Toluca in her postcard to Ms. Holland. She also asks to “Please watch the promo for the show and I am sure that you are going to enjoy it as much as we DANS do. Let Majandra Delfino and Brendan Fehr know, when they can continue working on this pretty cool show… and let us know when we can watch it.”

RoswellBack’s Debby also made a request for B+T by writing a lovely letter. “I know you are busy, but I would be honored if you would take a moment of your time to watch the promo, and see firsthand just how fantastic B+T is.”, she wrote.

Check out these first posts and please make sure to write your letter to Netflix today. Add the campaign hashtag #NETFLIXforBandT, tag @crashdowncom and @roswellback and we are happy to retweet!

@Trex6D has already started on the C.I.N.D.Y FOR B+T mission- here’s his letter to Cindy @netflix! Sent urs yet? #netflixforbandt pic.twitter.com/jIaPBfvtAR