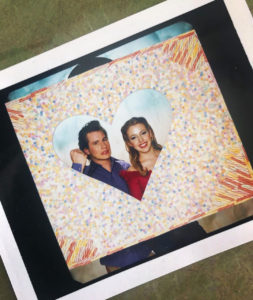 ”To @majandrama, hope your birthday is as sweet as #Candy,” wrote Brendan Fehr on Instagram and shared a polaroid picture of a photo shoot they did together for Teen People in 2001 during the “Roswell” days.

Brendan added the hashtags #tbt #bts #polaroid as well as #BandT to the caption of the photo. The fan comments are pretty amazing. Besides many well wishes to the Birthday-Girl, fans got nostalgic and enjoyed this outtake of the photo shoot very much.

Heather wrote in the comments “This picture makes me happy :) Happy Birthday @majandrama”.

Debby from Italy revealed that Michael and Maria is her favorite couple ever. One of her usernames is still ‘SweetCandy85’, just for M&M. She added “I still have some magazine cover and posters of M&M. I’m looking forward to watch B&T… I don’t even doubt it will Happen. Love from Italy.”

Brendan also took some time to write a reply to the fans who commented. Amanda told Brendan that she still owns these magazine pages and asked “What does that even say about me?” Brendan told her “it’s people like you who made this show so special.”

“My favorite tv couple of all time 😭❤️ they just had something so special that no one can recreate.” commented Miinerva and Derek replied to her: “we should try tho.” Brendan told them in the replies: “oh we are.” and he added the #BandT hashtag.

Kerry discovered “Roswell” during the hiatus of The CW’s re-imagining of the “Roswell High” books. She wrote “I decided to watch the original one and OMG!!! I’m so much more in love with the original because of Michael and Maria!! Like I want B + T to happen sooooo BAD!!!! Netflix better get with the damn program!!!”. Brendan replied in capital letters, telling her “WE’RE GONNA DO THIS!!!”

olyauvarova commented: “My favorite couple on Roswell❤️” and Brendan just agrees. He answered: “mine too!”

“Why didn’t B and T ever happen 😭?” wrote Instagram user avid_rdr with a sad crying emoji. “oh it will. Stay tuned.“ wrote Brendan in a reply to her.

While we stay tuned, please head on over to Majandra’s social media pages (Twitter/Instagram)and show her some Birthday love.

Share the B+T promo and don’t stop chatting about it!

Would you love to see the photos that made it into the magazine? Please visit Brendan-Fehr.net and check out the gallery of MAD-Online.org.

To @majandrama, hope your birthday is as sweet as #Candy. #tbt #bts #polaroid #BandT