The article “ABC executive defends ‘Grey’s Anatomy’ ghostly romance” has been published by Associated Press on January 16. It’s about the Izzie and Denny storyline and what ABC Entertainment President Stephen McPherson says about the “ghostly romance” on the show.

UNIVERSAL CITY, Calif. — Is there a ghost of a chance that the renewed relationship between live Izzie and dead Denny on “Grey’s Anatomy” makes sense?

“In terms of the ghost stuff, it’s not a ghost, which you will learn,” McPherson told a meeting on Friday of the Television Critics Association.

“You will be surprised at how insightful and smart the story line” is for the characters and for the show’s direction, McPherson said. But, he added, viewers will be the judge.

At the end of the 2005-06 season, Dr. Izzie Stevens’ (Katherine Heigl) short-lived engagement to Denny Duquette (Jeffrey Dean Morgan) ended with his death after heart transplant surgery. But he’s been reappearing to her in encounters that have turned passionate.

Julie Benz recently told Kristin from E! Online that she is a big fan of the show. “I would love to get steamy with McDreamy! It would be fun to break up Meredith and Derek. Or, I would love to die [on Grey’s Anatomy]. Come in with some horrific accident or something, like a tree through my stomach would be kind of fun.” 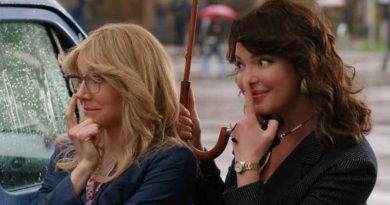 Catch Up on “State Of Affairs” & Watch A New Episode Tonight