It often happens nowadays, that people impersonate a celebrity on Twitter, MySpace or other networks.

Julie Benz, a self described Twitter addict, recently talked about her new hobby. She explains, that it’s a great way to keep contact with her fan base. Julie, who portrayed (Agent) Kathleen Toposky on the show, tells that she reads all messages and she looks at her fans profiles.

She has some celeb favorites like Harvey Levin from TMZ, Rachel Zoe, Oprah, and Joel McHale… Julie reveils that her favorit would be Perez Hilton.

You can read the full interview on www.pepsicointernetweek.com. In this talk Julie announced the airing date of the Livetime Movie “Held Hostage” in which she stars. The film will premiere on Lifetime on July 14, 2009. Another project titled “Boondock Saints 2” is going to hit theaters this fall. In addition, the new season of “Dexter” starts September 27 on Showtime.

Majandra Delfino joined the mico blogging service this April. She posted a picture of herself from her phone to prove the fact that it’s really her. From her cute pink phone the actress and singer adds the most of her entries. On Twitter, she announced the sad news concerning her promising new series “Pulling”, which ABC unfortunatly didn’t pick up.

If you like to find out what’s next for Majandra keep checking her official Twitter page. There she also made promotion for the beautiful fansite www.mad-online.org. In addition, Majandra has a page on MySpace and don’t forget her official website www.majandra.com 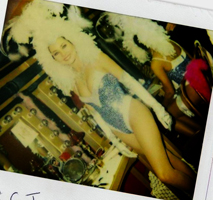 Nicole Brunner starred in six episodes of Roswell’s season two. Her character Leanna was first introduced by Alex in episode #212 We Are Family. He introduces Leanna as the young swedish girl, whom he meet during his stay in Stockholm. But later the friends find out, that her real name is Jennifer Coleman and she’s a student at a University in New Mexico …

If you’re going to Comic Con in San Diego keep your eyes open. Nicole is visiting the event. In addition, there you could ask her if she found out, why this car was going to the airport.

Today, a C.S.I. episode with Nicole airs on Spike at 1 am.