Shocktillyoudrop.com reports that Back in April of 2007, producer Robert Burnett and director Dave Parker put together a pitch teaser trailer for what would eventually become “The Hills Run Red”. 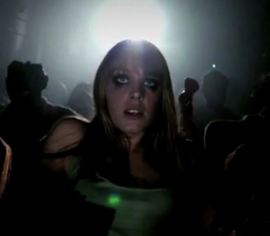 In this teaser trailer Sara Downing, who is best known as Courtney for “Roswell” fans, plays ‘the girl in the chair’. The website gives the information that it was shot in one day on a shoestring in the Vine theater on Hollywood Blvd.

In addition, the original animatic teaser which illustrates Dave Parker’s vision for the teaser can be found in the article The Original Hills Run Red Pitch Trailer

You surely didn’t miss that William Sadler later played the lead in the movie that recently has been released on DVD. You can find some more articles in the news archive.

Fangoria: 10 Examples of a pulse in the modern slasher