Adam Rodriguez will be back on “CSI: Miami” … full time! Adam himself announced the news via his official Twitter account @amaticrodriguez:

Twit Fam, I have some news that I hope will make CSI:Miami fans happy. Eric Delko will be back to the show full time 4 all of season 9!!!
about 21 hours ago from web

I know I’ve said it many times but once again, thank u all for your constant support!!! I hope you’re all excited about this news!!!
about 21 hours ago from web

Read here responses from the press:

Eric Delko Will Be Back on ‘CSI: Miami’ Full-Time

[…] CBS has also confirmed the return although did not go into details when he would be seen regularly since. Following a series of traumatic events in Eric’s life, the character was written off in several episodes in late season seven and the current season eight. While his character is in and out of the unit, Rodriguez spent his time filming a recurring role on “Ugly Betty”. But now that ABC has announced that “Ugly” is coming to an end, Rodriguez will have the time to concentrate on “CSI”.

Adam Rodriguez to return to CSI: Miami
Looks like Eric & Calleigh’s romance may actually survive this season. After months of anticipation and countless online support, fans of Adam Rodriguez and CSI: Miami got the news they were waiting for since they found out that he would spending season 8 as a recurring character on CSI: Miami.

Welcome back to CSI: Miami, Adam, we certainly missed you.

“CSI: Miami” will be welcoming one of its own back into the fold next season.

Adam Rodriguez, who left the show after a few episodes this season, will return to the show full-time next year. Rodriguez tweeted the news on Friday (Feb. 19), saying, “I have some news that I hope will make ‘CSI:Miami’ fans happy. Eric Delko will be back to the show full time 4 all of season 9!!!” […] 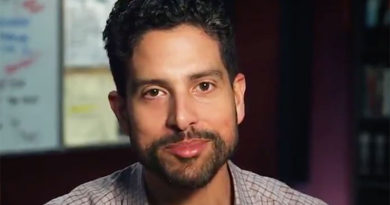 “Criminal Minds” Cast Has One Last Message For The Fans

“I call it love” – Adam Rodriguez