Please stop reading, if you have yet to watch the finale of Grey’s Anatomy because there are spoilers ahead!

“Grey’s Anatomy” creator Shonda Rhimes discussed the season six finale with Entertainment Weekly’s Michael Ausiello. In this interview Katherine Heigl, who left the series earlier that season, was mentioned. In addition, there’s a “Roswell” connection in this thrilling finale.

[…] Had Katherine Heigl not left the show, what role would Izzie have played in the finale? Would she have been killed?
RHIMES: I have no idea.

Talk to me about the decision to have Alex call out for Izzie after he was shot.
RHIMES: I really wanted to find a way to deal with how much Alex is missing Izzie. And it felt really poignant to me that if he was lying on a table dying he’d be calling for her.

Lexie confessed her love for Alex, but some fans aren’t buying it. She didn’t really make a decision between Alex and Mark in that moment, did she?
RHIMES: I don’t think she could have possibly made a decision in that moment. The thing I think is interesting is that Alex definitely made his decision. So I don’t necessarily know that there’s a triangle there. When Alex called for Izzie — when in your hour of need you’re calling for another woman — I think he made his decision. So I don’t think there’s a triangle. […] 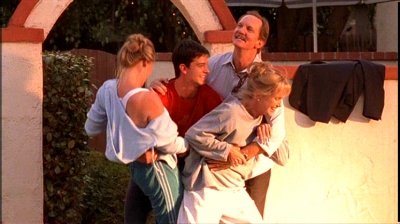 Michael O’Neill who played Gary Clark, the man who blames Derek for his wife’s death, appeared on “Roswell”. He played Max and Isabel’s dad in the beginning of the first season.

“Top 10 Shows That Were Canceled Too Soon”