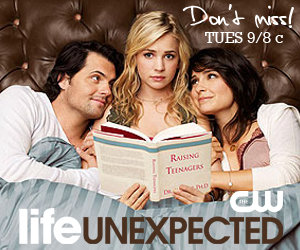 TV.com Staff Writer Louis Peitzman had a conversation with Shiri Appleby about her show “Life Unexpected” which airs Tuesdays at 9/8 c on The CW. The reporter spoke to Appleby about Cate’s major life changes, Life Unexpected’s growth, and yes—how Liz and Max are faring after all these years.

Make sure to read the full interview on TV.com.

Since we were talking about marriage, I have to ask—and I hope you’ll forgive me for asking a Roswell question—are Max and Liz still happily married?
Oh, you’re so cute. Yes. Wouldn’t it be great to do Liz and Max, 10 years later?

Yes!
The other day, I mentioned to Liz Tigelaar, “Bring Jason Behr on the show!”

I was going to ask if there was any chance of getting him to guest star.
I would love it. I would love to work with him again. I think it would probably freak Kris [Polaha] out, because maybe I have more chemistry with Jason than I do with him.

The second episode of the new season is entitled “Parents Unemployed”. In this episode Emma Caulfield, who is best known for playing Anya on Buffy The Vampire Slayer, fist appears on the show. Don’t miss it and make sure to spread the word about this great series. You can easily support the show with a Twitter Background or a profile pic. Find out more on Lux-Source.com!

One thought on “Shiri Interview and “Roswell” mentioning”