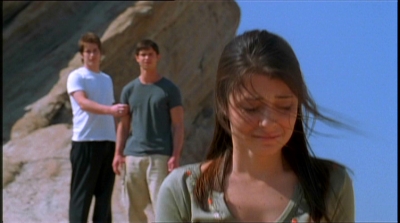 The “Roswell” blog entry number 4 out of 10 has been released on Entertainment Weekly’s blog ‘The Community’.

The newest post is about the season one finale: ‘Roswell’ recap: Meet the Royal Four

The first-season finale of Roswell goes hand-in-hand with the previous episode. Basically, Max was captured and tortured by an FBI special-unit alien hunter. Michael, Isabel and Tess break into the high-security facility, where they happen to run into Nasedo. This marks the first time Michael is meeting Nasedo, and he’s disappointed to see that he’s really actually quite dangerous because he doesn’t hesitate to kill agents left and right. Michael at least picks up one new trick from Nasedo, which is the ability to transfer someone else’s fingerprints onto his own. This power works well with Isabel’s dreamwalking to warn Max they are coming, and Tess’s ability to alter Agent Pierce’s perception so that Michael and Nasedo can save Max.

While the aliens are busy doing the dirty work to free Max, Liz feels helpless and turns to Valenti for help.

Next week, Community Contributor Jen Winkler will be moving onto season two with “The End of the World”.

As you know, 2014 not only marks the 15th Anniversary of Roswell (on October 6th) but also Future Max used the granilith’s power to travel back in time in 2014. Please make sure to rewatch this amazing episode and look forward to the next “Roswell” recap on EW.