We know that #TheDans out there are missing tweeting with their B+T family, so how about we run a twitter party for old times sake? Gotta show the world our love to Majandra and Brendan and how much we STILL want B+T. So let’s show em! This time around let’s not only tweet to Netflix but to Hulu as well, especially since they have been so receptive as of late…. (Tweet 1 | Tweet 2 | Tweet 3)

To do so and get the word of B+T more spread, how about utilizing one of Summer’s hottest Shows– GAME OF THRONES! –Something tells us that Roswell’s Commander Michael Guerin would’ve loved this show for its battles and medieval depiction of military intelligence!

To spread the word of B+T Let’s utilize the Game of Thrones’ hashtag: #GOT (for “game of thrones”) in our tweets.

Here are some examples of tweets:

.@NETFLIX #GOT any plans to pick up #BandT yet? https://youtu.be/ix-t3wlUuwU #NETFLIXforBandT

.@HULU We #GOT some new original content you could use! https://youtu.be/ix-t3wlUuwU #HULUforBandT

.@NETFLIX, we love #GOT- we love #BandT too! Check it out https://youtu.be/ix-t3wlUuwU #NETFLIXforBandT

Oh and if any new fans ask you what B+T is, point them to this article (So you just heard of B+T ey? | What is B+T?) that gives the fan history of what they’ve missed out and of course the B+T website www.baronandtoluca.com.

Don’t forget to use B+T fanart, GIF’s, and nifty pictures to attract more people to B+T in your tweets! Also, be mindful to retweet (not just like) and reply to tweets as much as you can if you are able to tweet live. The stir will cause more B+T commotion that we want to draw Netflix and Hulu’s attention to.

Tweeting will start on Sunday August 27th from 8PM EST- 10PM EST. Here’s the chart or click on the Time Event Link to see when exactly you have to tweet depending on where you live. 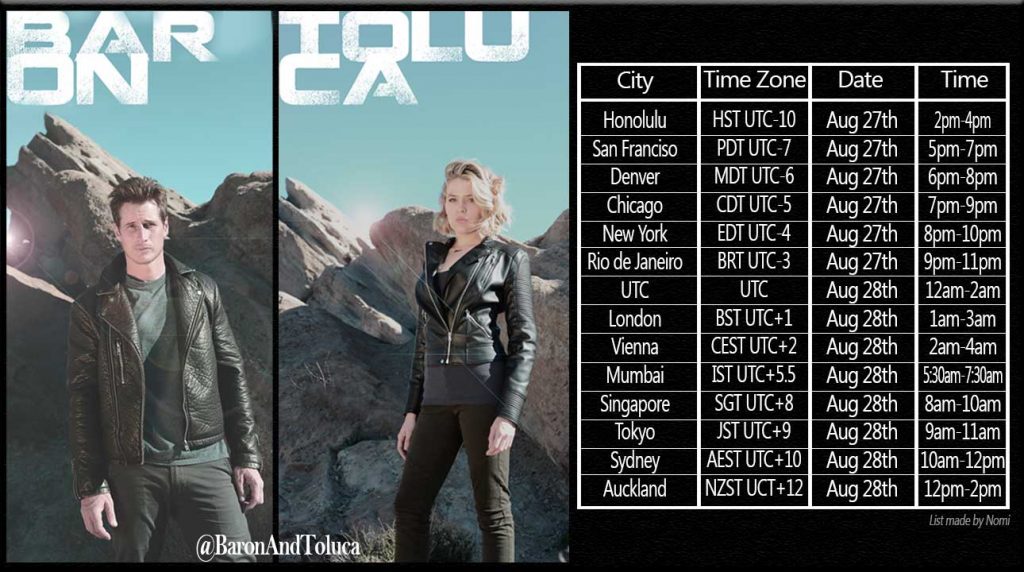 Let’s spread the word and make the hashtags #NETFLIXforBandT and #HULUforBandT trend like crazy!

New diary entry on Majandra.com: My Space NOT ME