“Hold me in your arms…” A short teaser trailer for The CW’s “Roswell, New Mexico” has been released. The 40 sec. video makes clear what viewers can expect from the show: A Mystery. A Legend. A Love.

“Roswell, New Mexico” premieres Tuesday, January 15 at 9/8c on The CW, and available next day free only on The CW App.

The CW wrote on their social media pages: “Their love knows no bounds. #RoswellNM arrives January 15 on The CW.”, while the showrunner added a long message to the post on Instagram:

Hey, so. I had a really wonderful and really awful year. The catharsis involved a lot of 90s music, a lot of road trips through wide open spaces, a lot of tequila, a lot of poetry, and some really spectacular people – many of whom have been in the trenches of beautiful New Mexico making this special show with me. I put my whole entire (kinda bruised) heart into it and then a whole bunch of other people threw in seat, blood, and tears. #RoswellNM starts Tuesday, January 15 on The CW. Watch it live, if you can. It’s the first thing I’m putting out into the world that is MINE, and I hope you love it.

Lily Cowles, who plays Isobel, replied “Love you so much. What an honor it’s been to be able to work with you.”. 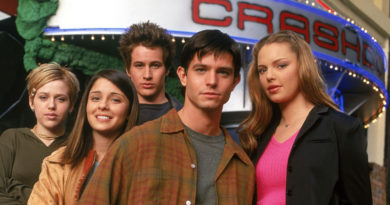 Watch ROSWELL For Free on Tubi!