Thanks to MistyMue for sending this in! 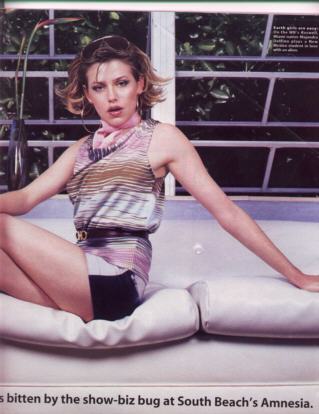 At first glance, blonde, blue-eyed and bilingual Majandra Delfino seems like a typical born-and-bred Miami girl: The 19 year-old is half Venezuelan and half Cuban, with apple-pie American looks – the kind of kid you’d never guess knew a cup of Pilon from a can of Pepsi until you heard her say empanda.

But she’s also so much more. Delfino plays the emotional Maria De Luca on Roswell, a weekly sci-fi teen drama on the WB. And she just finished shooting Traffic, a film starryin Catherine Zeta-Jones and Michael Douglas. She describes her role as “a really preppy, smart Ransom Everglades-type girl” who deals with insecurities and “all that high-school peer-pressure crap” with substance abuse.

“She’s this sweaty drug addict whose parents think she’s an angel because she gets straight A’s. It’s really kind of an exciting part to play, because I knew people just like that when I went to Ransom,” explains Delfino, who later transferred to Miami’s prestigious New World School of the Arts. For the school’s competitive admittance audition, she formed a girl group with close pals Samatha Gibb and Nicole and Alana Chirino, daughters of Miami based music stars (Maurice Gibb of the Bee Gees and Willy Chirino). All three girls made it in, though Delfino’s string of successes soon moved her across country.

She was first bitten by the show-biz bug at South Beach’s Amnesia nightclub, where she and her friends attended a casting call she heard about over the radio. After beating out 450 kids for a role in the movie The Babysitter’s Club, Delfino knew she had something. “It was the first time I realized that not only do I like to do this, I could actually succeed in doing this,” she says. In the end, although the casting call turned out to be a publicity stunt and Delfino never appeared in the movie, the experience stimulated her taste for the stage and silver screen. Within 3 months, Delfino had found an agent in Los Angeles, and scored a part opposite Kathleen Quinlan in the $20 million film Zeus and Roxanne.

Delfino says she misses South Beach, but plans to stay in Tinseltown – as long as the offers keep coming. Roswell has been picked up for another season and she’s contemplating college at UCLA. Although she’s loving the starlet life (“it’s crazy to say it’s a job – literally you get to eat and talk and have a good time”), she’s hoping her next big gigs will be the musical kind. But make no girly-pop conclusions: “I may be wearing a cute, little white outfit right now, but my music is moody drum and bass,” she says “I’m no Brittany Spears – that’s just not happening.”

Behind the Scenes at Roswell

Look Who’s Back on TV!