Thanks to everyone who sent this in!

Roswell is mentioned several times in the October 6-11, 2001 issue of TV Guide.

(Tues, UPN) This sci-fi soap opera starts its second season with a bang: Max (Jason Behr) and Liz (Shiri Appleby) are jailed after breaking into a convenience store. It wasn’t cash they were after but a spaceship in the store’s basement. Roswell is wacky but knows it, and it continues to skillfully combine teen angst, cosmic adventure and wit. My score: 7 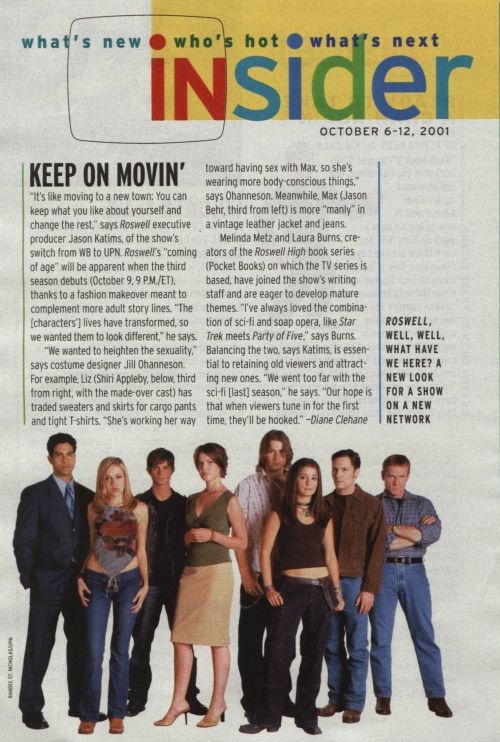 “It’s like moving to a new town: You can keep what you like about yourself and change the rest,” says Roswell executive producer Jason Katims, of the show’s switch from WB to UPN. Roswell’s “coming of age” will be apparent when the third season debuts (October 9, 9 P.M./ET), thanks to a fashion makeover meant to complement more adult storylines. “The [characters’] lives have transformed, so we wanted them to look different,” he says.

“We wanted to heighten the sexuality,” says costume designer Jill Ohanneson. For example, Liz (Shiri Appleby, below, third from right,with the made-over cast) has traded sweaters and skirts for cargo pants and tight T-shirts. “She’s working her way toward having sex with Max, so she’s wearing more body-conscious things, says Ohanneson. Meanwhile, Max (Jason Behr, third from left) is more “manly” in a vintage leather jacket and jeans.

Melinda Metz and Laura Burns, creators of the Roswell High book series (Pocket Books) on which the TV-series is based, have joined the show’s writing staff and are eager to develop mature themes. “I’ve always loved the combination of sci-fi and soap opera, like Star Trek meets Party of Five,” says Burns. Balancing the two, says Katims, is essential to retaining old viewers and attracting new ones. “We went too far with the sci-fi [last] season,” he says. “Our hope is that when viewers tune in for the first time, they’ll be hooked.” — Diane Clehane 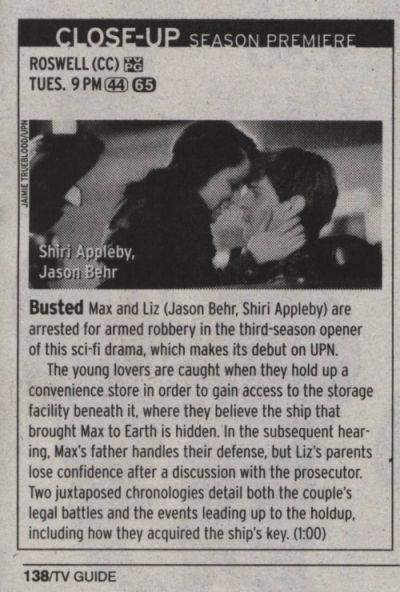 Busted Max and Liz (Jason Behr, Shiri Appleby) are arrested for armed robbery in the third-season opener of this sci-fi drama, which makes its debut on UPN.

The young lovers are caught when they hold up a convenience store in order to gain access to the storage facility beneath it, where they believe the ship that brought Max to Earth is hidden. In the subsequent hearing, Max’s father handles their defense, but Liz’s parents lose confidence after a discussion with the prosecutor. Two juxtaposed chronologies detail both the couple’s legal battles and the events leading up to the holdup, including how they acquired the ship’s key. 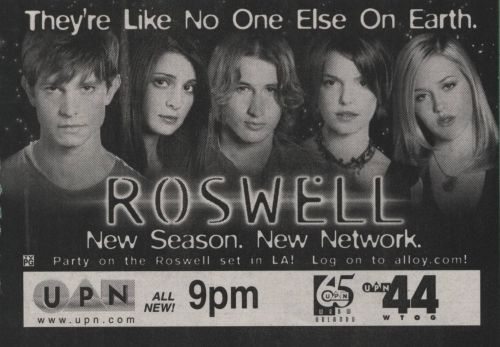