Thanks to Joe and Alicia for sending this story these photos: 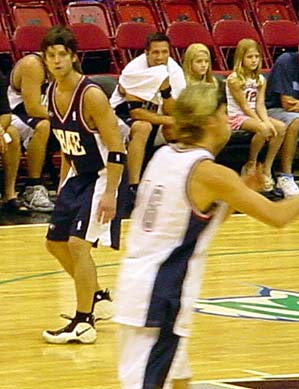 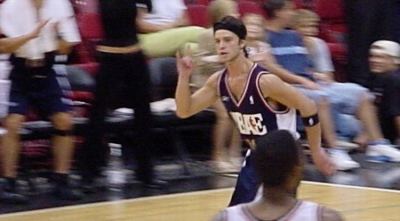 We arrived later than we had planned so we had to sit quite a few rows up, but it was still worth it. It was fun to see all of these famous celebrities taking time out of their busy schedules to entertain their fans in such a laid back atmosphere. They all maintained an air of comradery as well as friendly competition. We were thrilled to see that Jason Behr was willing to return to his hometown and that he was able to play for the majority of the game. He was a great sport throughout the entire game. He helped his teammates up when they fell, and he clapped whenever any of the players made a shot, regardless of which team they were on.

The game consisted of two twenty-minute halves, including some half time entertainment provided by the Minnesota Lynx male and female cheerleaders and the Lynx mascot. Both teams played well, but there seemed to be a lot of fouling going on. At one point, Ashton Kutcher ran into Jaleel White and they got involved in a little wrestling match. Jason ran up behind Ashton and gave him a few spankings; even the referees got a good chuckle out of it. But everyone hugged and made up before the game continued. It was all in good fun. In the end, the Blue Team beat the White Team 53 to 49. (At least I think that was the final score.)

Following the game, Jason was one of the first celebrities to make his way over to his eager, waiting fans. He signed lots of autographs, smiled for tons of photos, and gave big sweaty hugs to many of his female fans. We waited patiently until we could make our way to the front of the crowd to get his autograph and a picture. (I think he may have thought we were a little odd since we were both wearing black sweatshirts with Roswell designs airbrushed on the front.) He politely asked us if we had another pen when he tried to sign an autograph for us and our pen ran out of ink, and he waited patiently while we dug for a new one. We were both impressed by the kindness he showed to his fans and it was truly an honor to meet him.