It was the worst job they ever imagined… and the best time of their lives. 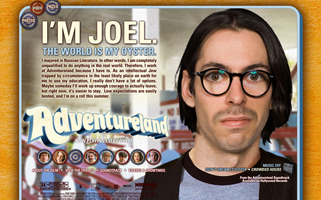 On April 3, 2009 “Adventureland” hit the US theaters. Alongside Kristen Stewart and Jesse Eisenberg, Martin Starr is in this movie, too.

Martin played Monk Pyle in the third season of “Roswell”. He worked together with Michael as night watchman in the chemistry company.

In 1978, James Brennan’s dreams of a summer European tour before studying at an Ivy League school in New York City are ruined after his parents have a severe career setback. As a result, James must get a summer job to cover his upcoming expenses at the decrepit local amusement park, Adventureland, where he falls in love with a witty co-worker, Emily Lewin. In that bizarrely shady workplace, the young carnies have unforgettable and painful learning experiences about life, love and trust while James discovers what he truly values.

Martin plays Joel who works at the amusement park.

The trailer and further information on the film can be found on the official movie page: www.adventurelandthefilm.com