Some movie reviews of Jason Behr’s “Last International Playboy” which debuts today in New York City have been published online. 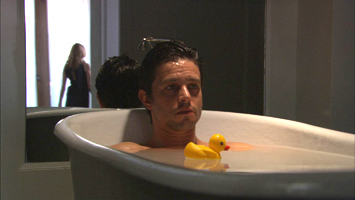 […] True, a reporter, Kate (Lucy Gordon) and 11-year old neighbor, Sophie (India Ennenga) function as a two-step program for his depression. But the movie doesn’t reveal many relationship truths. It’s about waiting for Jack to randomly snap out of it. One scene is unintentionally funny because it shows Jack brooding in his bath with a rubber ducky. […]

The movies section on the NY Times added a review of the movie to their website, as well. Read their review here.

[…] Instead we’re treated to scene after scene of Jack on his back, expressing the loneliness of the long-distance player with morning-after stubble and hangdog eyes. “He’s having an existential crisis,” explains Sophie. Too bad it’s not a very cinematic one.

Finally, an interview with Jason Behr has been published on Blackbookmag. There, Jason explains the hardest scene to shoot in this movie and more.

Please follow this link to read the short interview.

Find out more about the film on the official website www.thelastinternationalplayboy.com