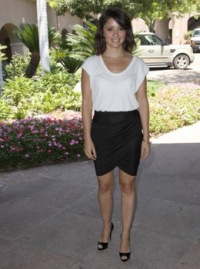 The reviews about the mid-season series are very positive and they praise the pilot of the show in which Shiri portrays Cate Cassidy, star on local radio and mother of Lux.

[…] That show is Life Unexpected, which CW programming head Dawn Ostroff described as “Juno meets Gilmore Girls.” After seeing the pilot, I can agree with that description. It’s sweet, warm, even a little bit hokey. In fact, it feels like a show that would have been on the old WB network. What the heck is it doing on the CW?

Life Unexpected is about how a Portland teen named Lux drops herself into the lives of her youngish and immature parents, who gave her up so they could finish high school, and how things change due to her presence. There’s a bit of a WB pedigree on the show, as co-creator Janet Leahy worked on Gilmore Girls and the other co-creator, Liz Tigelaar, worked on Dawson’s Creek. Oh, and star Shiri Appleby was one of the main players on Roswell. No wonder why it feels WB-ish.

The whole panel did a nice job of charming the grumpy critics. It was especially funny when Tigelaar expressed surprise that Kris Polaha, who plays Lux’s erstwhile dad Baze, wasn’t as “douchey” as she thought he might be. Always good to hear “douchey” in a press session, right?

In 1999 when Shiri attended the WB TCA Press Tour she stood on almost the same spot to pose for the photographers. Go back in time and take a look at the pictures in the Sappleby.com galleries.

Yahoo Auctions: Want To Have Lunch With Shiri?

“Dating Rules From My Future Self” – Season 1