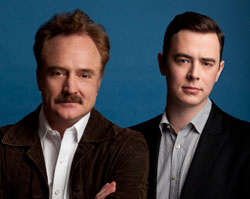 The FOX network released their summer lineup with Colin’s new series “The Good Guys” as headliner.

According to THRfeed, the network will bring back “Lie to Me” in the summer as part of its post-season strategy. The crime series with Colin Hanks and Bradley Whitford will premiere on June 7, 2010 and will be paired with “Lie to Me”.

It’s the third change of the series title since pre-production. The mini-series was formerly titled “Jack and Dan” as well as “Code 58”.

“Past Life” will be back in the summer lineup with new episodes. In this series Nick Wechsler made a guest-appearance. The episode “Soul Music” aired on February 18.

Get Your Tickets: Wits – Colin Hanks with Father John Misty (Sept. 28 in Minneapolis)