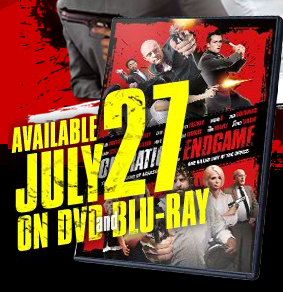 Emilie told TVGuide about the movie: “I would best describe it as an action-comedy about government assassins working for a top-secret facility. That was a fun, fun film to work on, because I haven’t explored much comedy. But I’m always trying to challenge myself in different ways.”

The official website www.operationendgame-themovie.com features the trailer, information about the characters and a synopsis:

Miles beneath the streets of Los Angeles lies the heavily fortified headquarters of ‘The Factory,’ an elite espionage cell unacknowledged by the U.S. government stuffed with files on shocking covert actions and balanced by competing teams of lethal operatives. But when a rogue agent murders their boss, the facility’s lockdown self-destruct mechanism is instantly activated. Now the clock is ticking, the only escape route is unknown, and our nation’s most eccentric assassins have been given their final order: Terminate each other on sight.

The unstable product of an intensely southern, religious upbringing, Hierophant is cute, giggly, and completely volatile. A master in hand-to-hand combat, she displays no sense of compassion or humanity towards those around her. Basically, she’s the high school cheerleader who kneecaps the competition.