Skip to content
Katherine Heigl Leading
February 2, 2011May 6, 2015 Webmaster katherine heigl, life as we know it

Katherine Heigl’s latest movie “Life As We Know It” will be released on Region 1 DVD and Blu-ray on February 8th, 2011. To celebrate the release Kheigl.com has several copies of the movie and soundtrack to give away.

Head on over to Kheigl.com and email your answer to the webmaster before February 15th, 2011:

DVD & Soundtrack Giveaway
To celebrate the release of “Life As We Know It” on DVD and Blu-ray we are offering you the chance to win the movie and the soundtrack to the film, courtesy of Warner Home Entertainment.

The romantic comedy follows Holly (Katherine Heigl) and Eric (Josh Duhamel), two seemingly unsure adults, who become unexpected parents to their best friends’ daughter after a tragic accident. As opposites attract, the two struggle to put aside their differences, learn how to care for their charming adopted daughter Sophie and become a family through these unforeseen circumstances. […]

Please note that this competition is limited to residents of the United States. 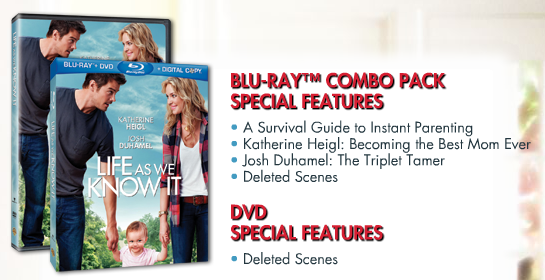 Some words about Katherine

“Life As We Know It” Preview