The dark comedy “Lucky” with Colin Hanks, Ari Graynor and Ann-Margret will receive a theatrical and VOD release this summer, Hollywoodreporter.com reports:

Phase 4 Films has acquired all North American rights to the dark comedy Lucky. The film, which will have its world premiere at the Dallas International Film Festival this week, will receive a theatrical and VOD release this summer. […] 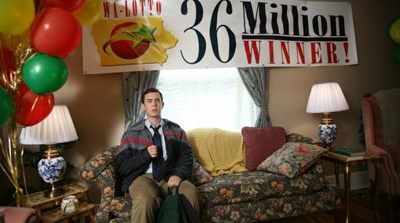 Please read the article Phase 4 Gets ‘Lucky’ With Colin Hanks in full.

The independent film centers on a fledgling serial killer, played by Colin Hanks, who wins the lottery and attempts to pursue his lifelong crush. “Saturday Night Live” scribe Kent Sublette wrote the screenplay for this movie with Gil Cates Jr. who also directed the dark comedy.