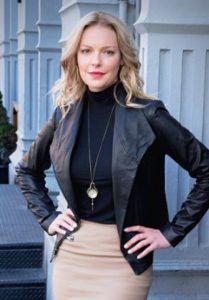 Have a question for Katherine Heigl? You have the chance to submit your questions via Facebook or Twitter.

Reply to the tweet or post below for a chance to have it answered during an exclusive interview with the “Doubt” star.

“Doubt” will premiere on CBS this fall.

DOUBT stars Katherine Heigl as Sadie Ellis, a brilliant attorney at a boutique firm who starts to fall for her charismatic client, Billy Brennan, an altruistic pediatric surgeon recently accused of murdering his girlfriend 24 years ago. Sadie is hiding her growing feelings from everyone, including her close friend and colleague, Albert Cobb, who thinks he knows everything about her. Working on other cases at the practice is Cameron Wirth, a transgender Ivy League graduate who fights passionately for her clients since she’s experienced injustice first hand; Tiffany Simon, a second-year associate who is quickly learning the ropes from Wirth; and Nick, a former felon who earned his degree while serving time. They all consider it a privilege to work for Isaiah Roth, a revered legal lion and “lefty” legend, whose approval is their holy grail. Sadie’s decision to become involved with her client could put her career, as well as her happiness, at risk if Billy is found guilty, which means she needs to work all the harder to prove reasonable doubt, even if she has some herself.

Have a question for @KatieHeigl? Tweet it for a chance to have the #Doubt star answer during an exclusive interview. pic.twitter.com/H7Pqj2x5UK

Katherine supports the “Knit One, Save One” Campaign