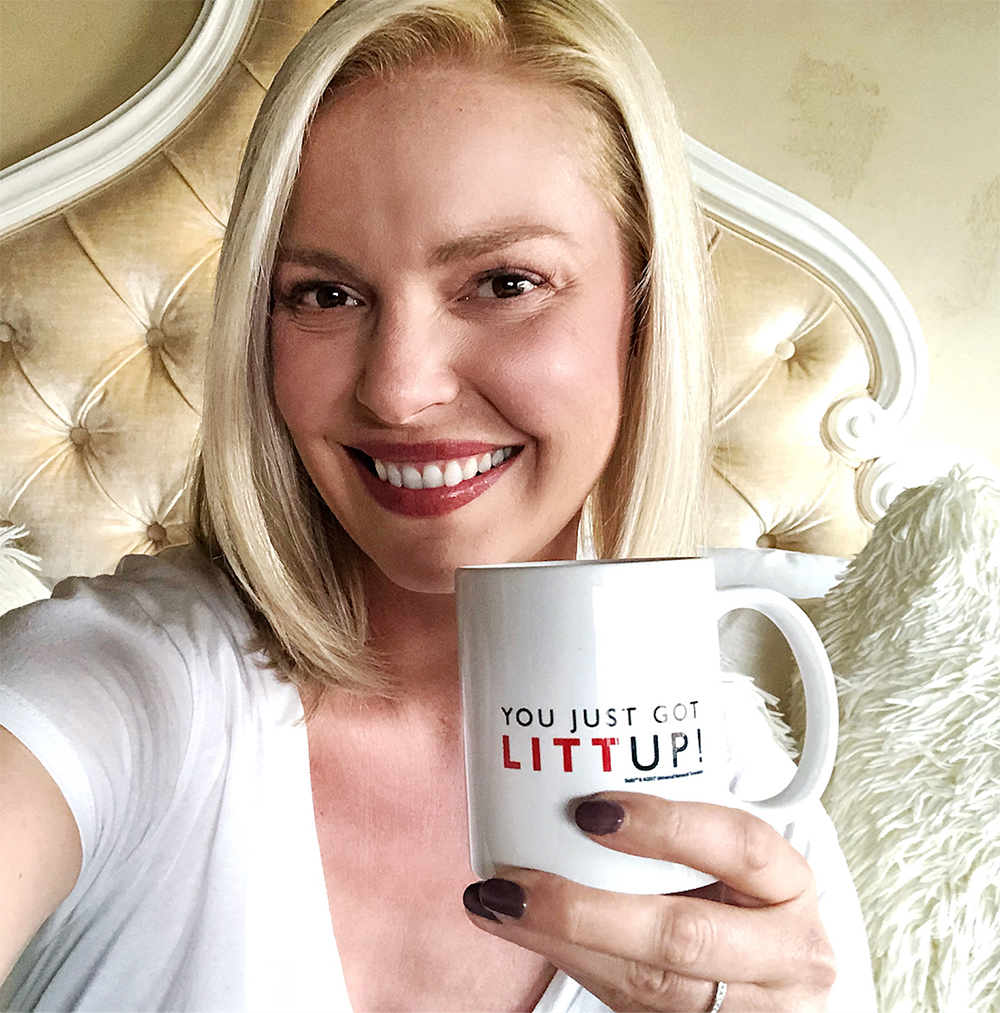 I JUST GOT LITT UP!!! wrote Katherine Heigl on social media. In case it’s all Greek to you, don’t worry Katherine explains. “For anyone who doesn’t know what that means… start binging #Suits ASAP!! I could not be more excited to be joining the cast and crew of one of my all time favorite shows!!”

The legal drama television series created and written by Aaron Korsh “Suits” airs on USA Network and is currently in its seventh season with a recent renewal for season eight.

Katherine took to social media to celebrate her new role as Samantha Wheeler, posing with a white mug with Louis’ catchphrase You Just Got Litt Up!. “I’m kinda a creepy fan girl…I hope I don’t make it weird on set…😏😳Anywhoo, it’s going to be SOOOOO MUUUCCHHH FUUUNNNN!“ and she is going to work together with her former “Doubt” co-star Dulé Hill. She added “Plus I get to team back up with one of my all time favorite actors and people Mr. @dulehill I mean could life get any better??!!”

She playful continues “Oh annndddd, this show turns actresses into princesses! Neat! So keep an eye out for my royal wedding announcement next year. Just kidding! I already married my prince @joshbkelley!“

Aaron Korsh the creator and executive producer of the show describes Katherine’s role in the official press release the following: “Samantha’s wit, charm, loyalty, strength and vulnerability will all be put to the test as she muscles her way into the firm currently known as Pearson Specter Litt.”

“Joining Suits was the perfect organic way to not only collaborate with an EP I admire deeply, but to also become part of a show and cast that I am an immense fan of,” shared Heigl. “I have watched Suits from the very beginning and feel incredibly lucky to be the newest member of the Pearson Specter Litt family.”

“On behalf of the entire SUITS team, I am extraordinarily excited to welcome Katherine Heigl into our family – I have always been a big fan of her work and was delighted to discover she was an avid SUITS fan herself,” expressed Aaron Korsh, creator and executive producer of SUITS. “I cannot wait to have her come play with our entire cast and crew. Unfortunately, the same cannot be said for Harvey, Louis, Donna and Alex as the mysterious Samantha Wheeler is a direct threat to their status quo. One thing is for sure – Samantha’s wit, charm, loyalty, strength and vulnerability will all be put to the test as she muscles her way into the firm currently known as Pearson Specter Litt.”[…]

Season 8 begins production this April in Toronto and the seventh season continues on March 28th, 2018 on USA.

Katherine is promoting “The Ugly Truth” in Europe