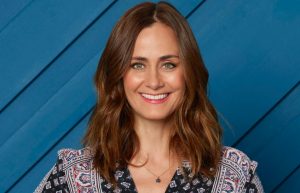 Diane Farr is a series regular on ABC’s upcoming show “Splitting Up Together”. The show is based on the Danish sitcom “Bedre skilt end aldrig” and centers on a couple whose marriage is reignited by their divorce.

Diane stars opposite Jenna Fischer and Oliver Hudson as Maya the wry single sister of Lena (Fischer) who pushes Lena to embrace her new singlehood in a plainspoken way that only a loving, older sister can. (via Deadline)

Visit the official website and watch the fun preview clips via their social media sites:

about splitting up together

Lena and Martin were once madly in love. But, like many marriages, time and circumstance eventually took their toll, and they decide that everyone’s lives would be better if they got a divorce. Facing a daunting real estate market, the couple decide not to sell their house and to “Bird Nest” instead. The ‘on-duty’ parent will live in the house while the ‘off-duty’ parent will live in the detached garage. As Lena begins to dip her toes into the dating waters, Martin begins to see his own culpability in his marriage falling apart.